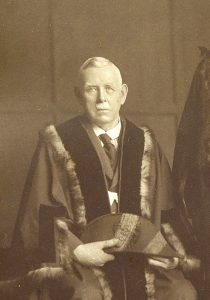 Club member Mary Thorley managed to locate two newspaper reports in the Western Mail in 1934 & 1939 which gave details about Mr Walters’ personal life and his status within the local community.

Mr Lloyd played for the Carmarthen Wanderers Football team in his younger days and was captain of the team in the 1883/84 season. He also acted as club secretary between 1883 & 1886. He was joint president of the club along with Mr David John Davies in the 1927/28 season.

Mr Lloyd’s brother John Lloyd also turned out for the Wanderers and later went on to play for Wales against Oxford University. Unfortunately, no caps were awarded in this game and he did not appear again in the Welsh jersey. He died in 1916.

Mr Lloyd was a well-known chemist in Carmarthen and the pharmacy continues to trade under his name. He was born in Llangunnor in 1859 and died in 1939. The family, at one time, resided above the premises in Lammas Street, but later moved to live in St. Non.s Avenue. Mr & Mrs Lloyd, who celebrated their golden wedding anniversary in 1934,  endured a number of tragedies during their married life. They had nine children, but sadly seven out of their nine children died before them. One of their sons who passed away was Dr. Walter Henry Lloyd, who was captain in the RAMC and was killed when attending to the wounded near Albert in France in August 1918. Another daughter, Elvira, died from accidental poisoning in the early 1930’s.

Mr Lloyd retired from town council duties in 1918 after serving for 25 years. He was elected alderman on two occasions and was Mayor in 1910/11. He became a justice of the peace for the borough in 1920 and became chairman of the panel of justices at the Juvenile Court. He was a founder of the West Wales Sanatorium in Llanybydder and contributed greatly by raising £2,000.00 for the building of the hospital. He was a former chairman of the County Infirmary House Committee of which he had been a member for half a century. He had also been the president; secretary and examiner of the Carmarthenshire Pharmaceutical Society.