I have come across several badges worn by players or presented to the club to commemorate certain achievements. This feature shows a photograph of each badge along with an explanation of why and when they appeared. 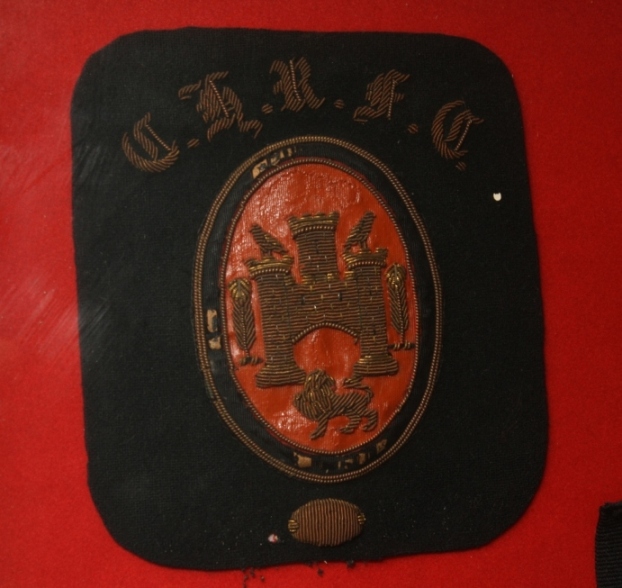 As far as we know, this is the first badge to have been worn by any player or official of the Carmarthen Harlequins RFC. The exact date it was made is unknown and it is presently on display in a “Rugby Ties” presentation cabinet at the club. This cabinet is one of two put together by Mr. Tony Rowberry, ex-player and ex-committee member, in the 1970’s. The fact that the cabinet is sealed and well away from any direct sun means the badge has retained most of its features but the true colouring may have altered over the years. Sadly, it does not have a date to help us. My thanks to Mr Colin Lewis club member for his camera skills in providing me with this copy. The first person I have come across to have worn this badge is Mr. D. O.H. (Tarzan) Davies (above) in a Quins team photograph for the season 1945/46.

Mr. Davies was born and bred in Carmarthen and attended local schools. He served in the RAF during the war and was the standard bearer during any local parades.

Mr. Davies joined the Quins committee in 1945 and he can be seen in the team photograph for that season wearing a blazer and club badge. This is the first photograph I have come across of any player or official sporting the club badge. He became Assistant Secretary to the club’s Honorary Secretary Mr. H. Lewis in the 1947/48 season. Although I don’t have any official records to verify this, I believe Mr. Davies remained on the Quins Committee until the late 1970’s.

Mr. Davies was Vice-Chairman to Mr. Bill Orman in the 1969/70 season and during the 1970’s, Mr. Davies devoted most of his time to the Youth XV serving as the Youth XV Chairman in 1976/77 when they won the Welsh Youth Cup and the Llanelli and District Cup. He was a well known rugby referee and was the first referee to run the line as a Welsh representative.

Mr. Davies was a keen cricketer having played a number of seasons for Carmarthen Wanderers and then took on the role of Umpire for a number of years. He was also a good shot and represented Wales in several shoot. 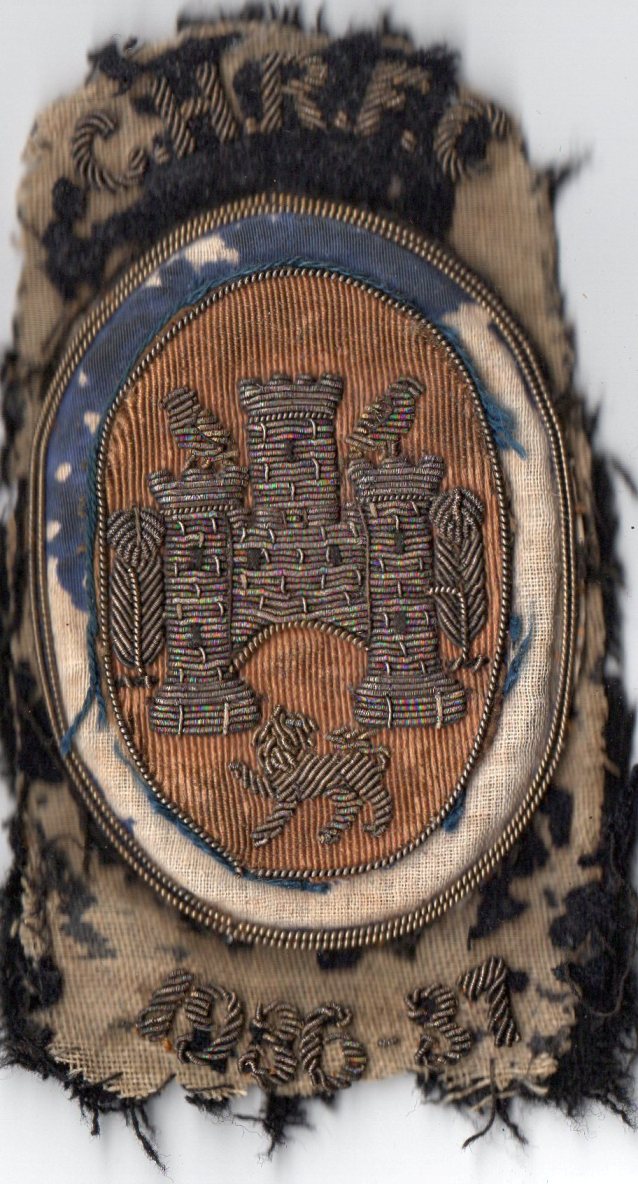 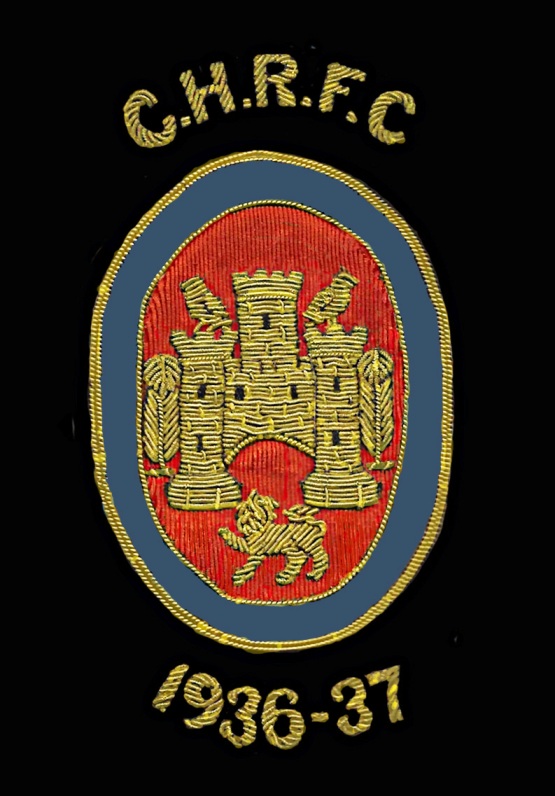 Carmarthen Harlequins RFC won the West Wales League Cup for the first time in the club’s history in the 1936/37 season. Winning the West Wales League Cup was the pinnacle of any club’s season and this was a very proud moment for the players, supporters and indeed for the town itself. As a mark of appreciation, the Carmarthen Town Council gave the club the Freedom of the Borough allowing them to use the town bridge as part of the logo for a special badge used to commemorate their achievement..

As far as we know, twenty badges were made. These were presented to the players/trainers who had represented the club that season. The only copy available to us was a framed badge given by Harry Thomas, Club Trainer at that time, to Tony Rowberry. This badge was in very poor condition and I am grateful to one of our supporters, Mr. Brian Light, for his photographic expertise in re-creating the badge as it would have looked when new.

I understand from Tony that he intends to formally present the framed original to our chairman Mr Brian Jones for it to be retained by the club as a very rare memento of a special event in it’s 141 year history. 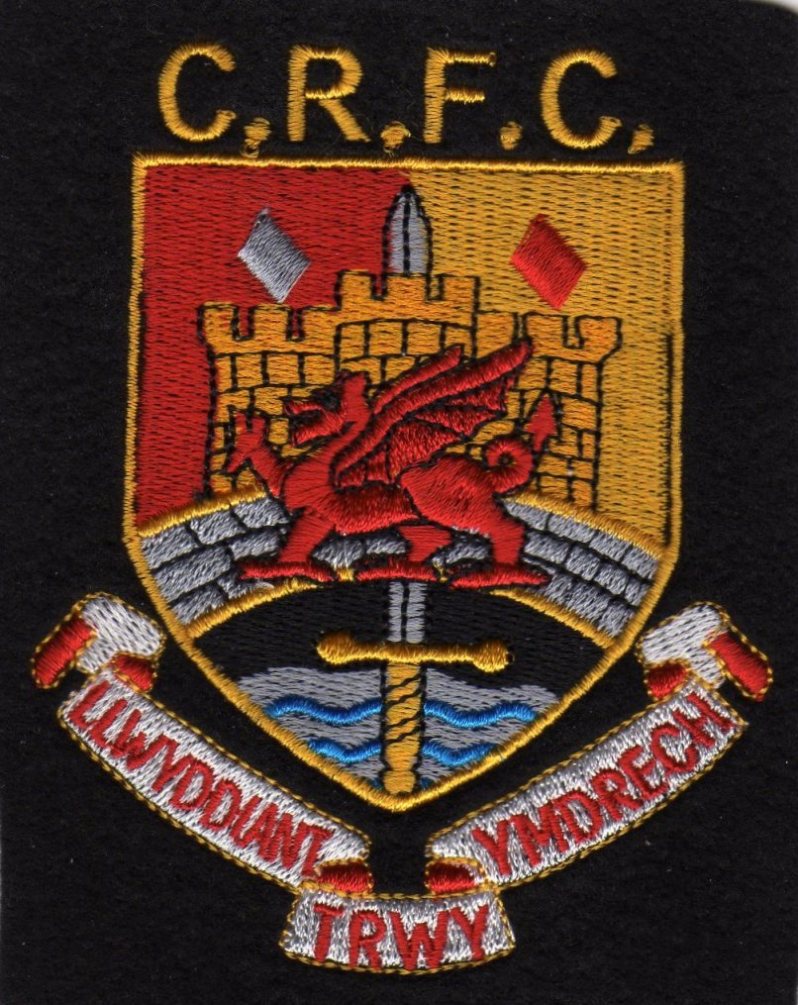 I have had some difficulty in ascertaining the exact year when the current badge worn by players and officials was actually commissioned by the club. Tony Rowberry and I believe it would have been around the early 1950’s as it is only then that any club official can be seen wearing the badge in any club photograph. The club’s motto “Llwyddiant trwy ymdrech” (Success through endeavour) would have been adopted at around the same time but again further research is needed to confirm this.

Up until recently, a player would have a badge presented to him once he had played 40 games for the 1st XV. This in fact was regarded as quite a privilege. Over the last few years, less attention has been paid by players to any official dress code and the importance of ties and badges being worn by players on any special occasion is now very much a thing of the past.

Some past players and many of the club’s committee members still turn up at the club wearing a blazer and badge so the tradition is still with us for the time being. 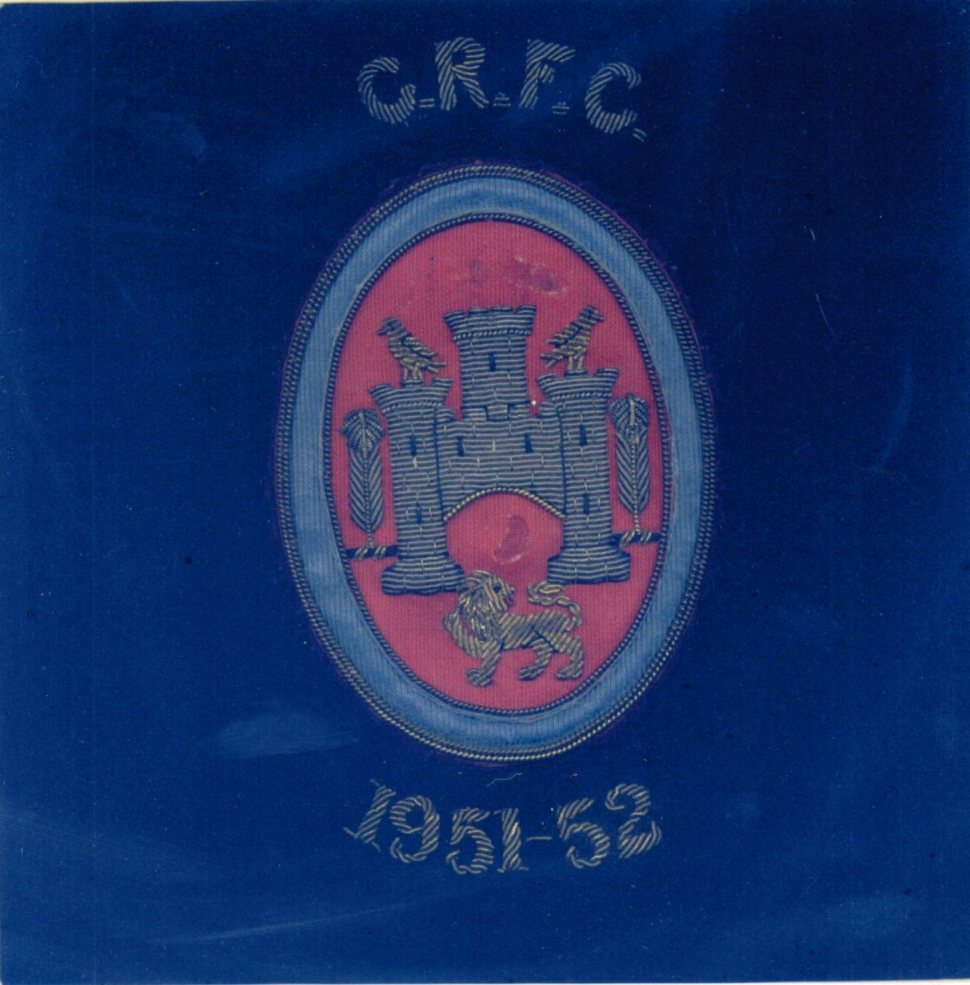 With reference to this blazer badge for the season 1951-52, it is my belief that it was purchased by John (Shony) Williams, a member of the illustrious front row of Gwyn (Strong) Thomas and Freddy (Flach) Evans the team’s captain, to commemorate the Quins record of not being beaten at home (Ground Record) that season.

If you wish to add this badge to your memorabilia, please accept with my blessing in memory of those Members of the Team of 50 years ago who are no longer with us. 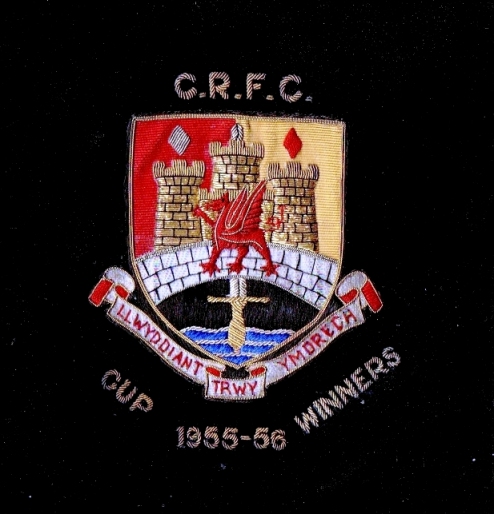 This special badge was presented to the club by Ieuan Jenkins.

The Quins had won all their league games by the time they beat Ystradgynlais by 6pts –3pts in the first round of the West Wales Rugby Union Cup in January 1956. They beat New Dock Stars away 14-0 in the Second Round; Trebanos 9-0 at home in a Preliminary Third Round match; Bynea 12-3 at home in the Third Round and got the better of Gorseinon by 12-3 in the Semi-final played at Stradey Park.

The Quins came up against Crynant (holders of the cup for the previous two seasons) in the Final played at St. Helen’s, Swansea, on Friday 22nd March 1956. It was deemed a very poor game with the match tied at 3pts each at the final whistle.

The game was replayed again at St Helen’s on Monday 25th March. Captained by John Evans, the Quins pack dominated their opposition and this gave the Quins backs some quality possession. Crynant were first on the scoreboard with an unconverted try. Right Wing Russell Davies was the first Quins player to score with a fine (unconverted) try. Crynant had another unconverted try going in to the lead by 6-3. The best movement of the game saw some brilliant play by Gwyn Davies, scrum-half, who linked with Brynmor Roberts and Derek Lewis with Derek Lewis touching down near the posts. Steve Lewis, Full Back, made no mistake with the kick. Crynant came back strongly to claim a winning score but the Quins held out for a memorable win in front of a huge gathering of Carmarthen supporters. 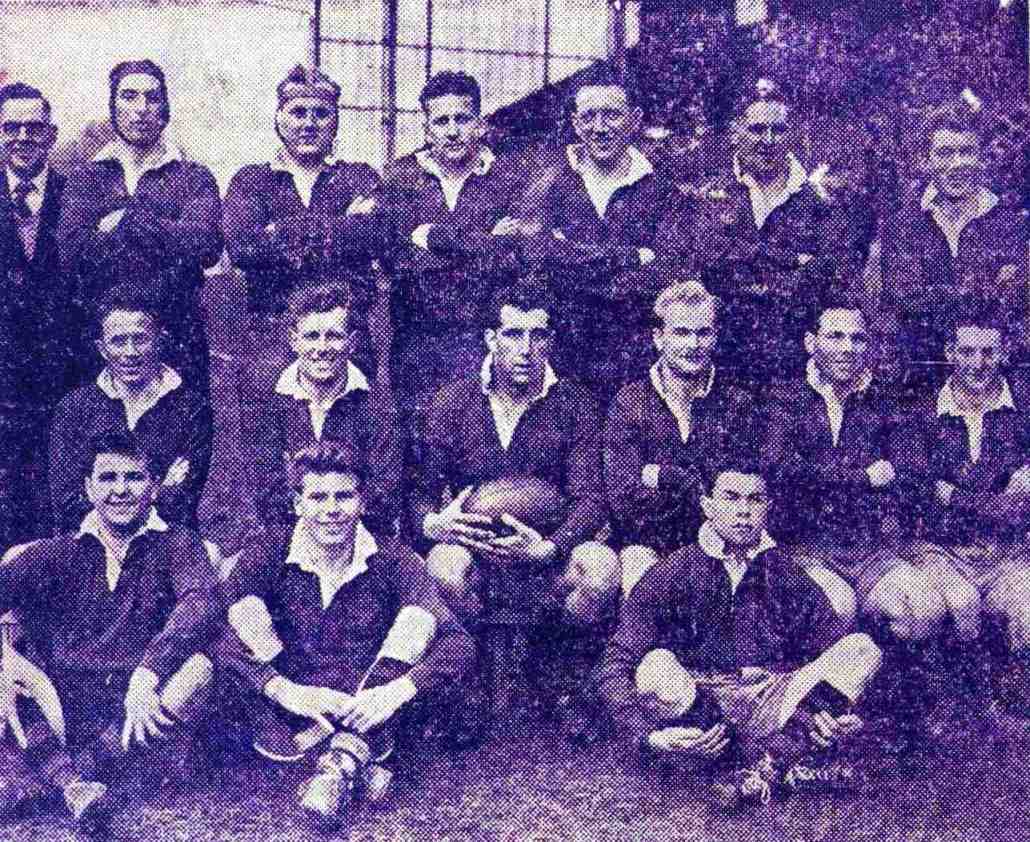 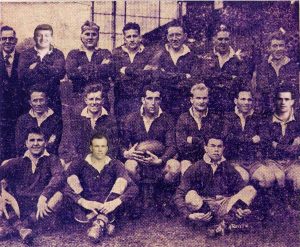 END OF SEASON TOUR TO GERMANY 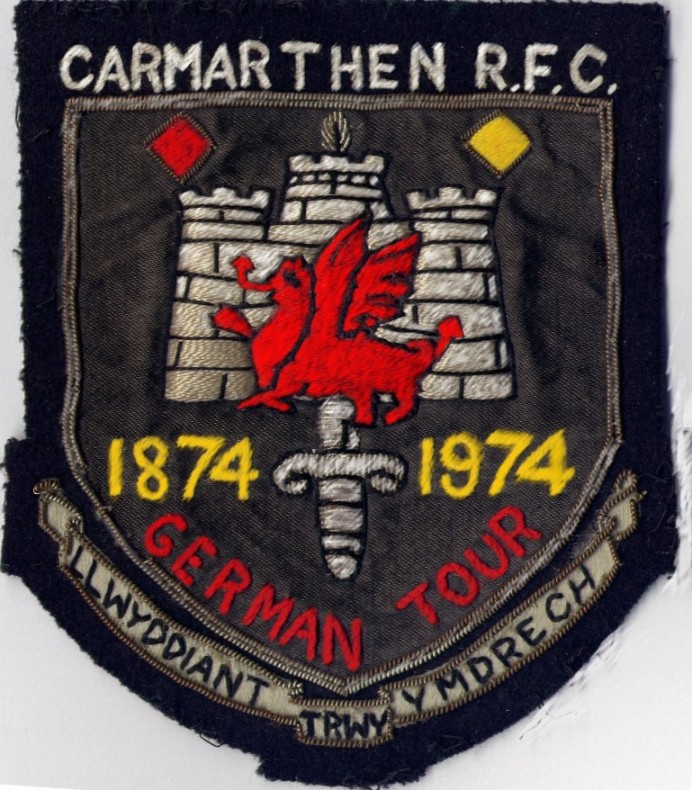 A large contingent of players and officials took part in a week long Easter Tour to celebrate the club’s centenary season. The initial tour destination had been a husband/wife tour to Canada but a poor response meant a change of plan resulting in the players making a three match tour to Germany. Players and officials were guests of  Commanding Officer Colonel Smith and his colleagues of the 22 Light Air Defence Regiment in Dortmund. Chairman Bill Orman and Captain Brian Llewelyn were the club’s ambassadors during the tour. All the players on tour participated in the three games played and the Quins were victors in all three games.

The above badge was worn by all players on their tour jackets during every “official” engagement and especially when attending the Officer’s Mess for formal dinner and speeches. A wonderful memento for what was an extremely successful and memorable tour.

MATCH REPORTS ON THE THREE GAMES PLAYED ON TOUR

Carmarthen Quins had three British Army teams on the retreat during their nine day centenary year tour to Dortmund, Germany. They won the trio of matches and in the process amassed  91 points and conceded only 20. With Colin Davies leading with the ‘Haka’ before kick-off  (just one of the funnier moments on tour), the Quins opened their  account on a high note with a superb 23 – 4 win over an entertaining R.E.M.E. side. The try scorers were Tim Edwards, Martin Stevens, Peter Evans, Graham Walters and Colin Davies. Davies also dropped a goal.

By the second game the round of social calls was beginning to take its toll on the tourists and Quins were forced to field a depleted team. They eventually scraped home 13- 10  against a strong Garrison XV after John Glanville had landed a late penalty. Earlier Robert Taylor had kicked two penalties and Percy Jones crossed for a try.

The final clash against a B.A.O.R Gunners XV was expected to be Quins’ toughest test but they sailed through to win by an amazing  margin of 55 – 6. They ran the Gunners ragged and fast flowing movement, produced nine glorious tries. The match was a personal triumph for centre Robert Taylor who scored 20 of his side’s points with a try, two penalties and five conversions. The other tries came from Graham Walters (2), Peter Evans, Martin Stevens, Dai Dyer, Tim Edwards, Alan Richardson and John ‘Llew’ Evans, who had flown in to join the tour party during the middle of the week. Peter Evans also dropped a goal. 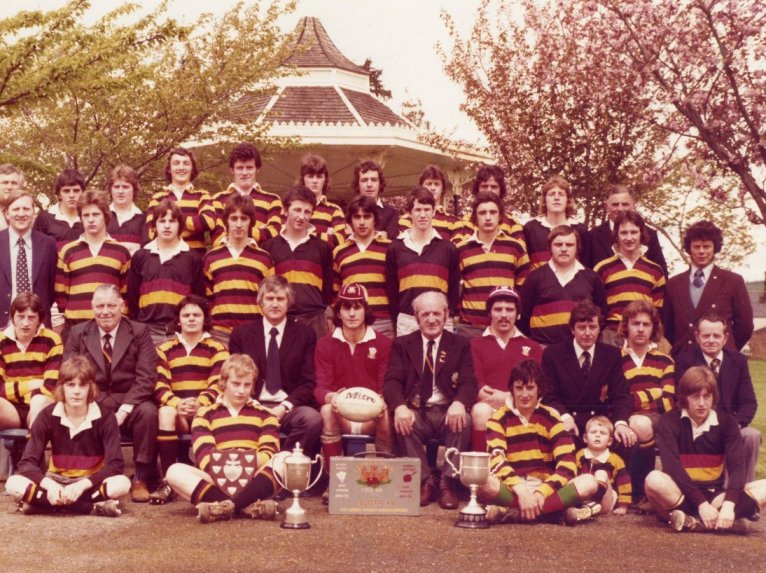 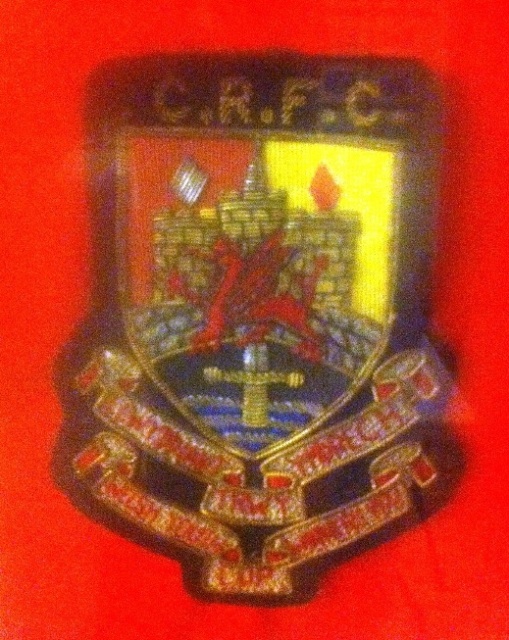 Should anyone know of the existence of any other club badges then I would be delighted to include them in this feature.