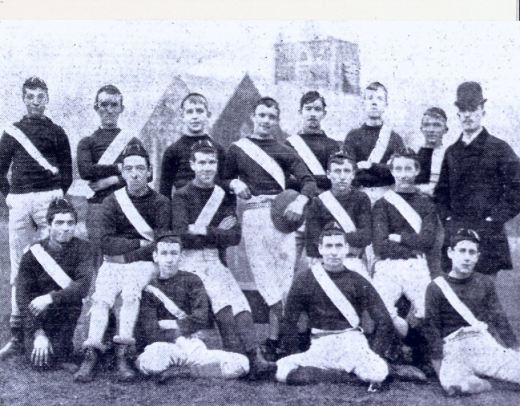 Carmarthen Journal 2nd December 1927 “By Gone Days”   “The above is a reproduction of a photograph of the Carmarthen Wanderers team in the first year of the club’s history – season 1888-89.* The team, although defeated on several occasions, had a first-class reputation and were captained by Ned Hughes, who can be seen in the photograph holding the ball. This side were really the originators of the present Carmarthen Harlequins. Their grounds  were at Morgan’s Arms field and the Railway Tavern field. This latter is now Carmarthen Park, entrance at that time being at the foot of Magazine Row, opposite The Porch. Included in this side are no less than seven local lads connected with the printing trade”

Supplied by Llyfrgell Genedlaethol Cymru / The National Library of Wales

*That is an inaccurate statement. The club was formed in 1874/75