This game was arranged through connections with Mr Denzil Jones originally from Carmarthen and brother of former Quins hooker and committeeman , Mr David Jones better known as Dai Chips. Both had been brought up in Little Water Street, Carmarthen.

Denzil had left Carmarthen to join the Mets and became Secretary of the Rugby team.

They stayed at the Falcon Hotel, Lammas Street and inflicted a defeat on the Quins primarily because of the physical superiority. 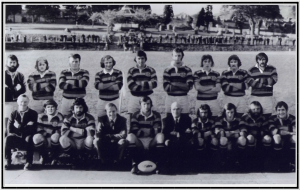 Carmarthen had the candles on their centenary year birthday cake snuffed out by a powerful and all-action Metropolitan Police team on Easter Monday.

The London bobbies massive pack plodded a little at the start but once they worked up a sweat, there was little Quins could do to contain them. They won the tight pieces with consummate ease and their speed in the loose proved a decisive factor in a sparkling second half that produced 22 points. England Under 23 wing  Steve Tiddy and full back Roger Allison were the men who really sunk Quins. They  were responsible for scoring all the ‘Met’ points.

Tiddy, an elusive runner, finished with a hat-trick of tries and Allison cornered the other 22 points with two tries, two penalties and four conversions. As was expected, Quins got off to the better start and were ahead after only a minute. They took play right to the police line and hooker Richard John wriggled out of a maul to touch down at the posts. Full back Gary Baker converted. Before the police had a chance to recover, fly half Colin Davies split their ranks with a probing run and centre Robert Taylor took up the move to send wing David Dyer thundering over from 30 yards. After Allison and Baker had each kicked penalties, the police began to fire on all cylinders. The pack smashed gaping holes in the Quins defence and the threequarters created havoc with swift handling moves and electrifying solo runs.

Steve Tiddy gave Quins warning of what was to come when he ghosted through for a corner try. Allison converted and just before the interval cut the deficit to 13-12 with a penalty. The second half was one-way traffic and it was the police who controlled it. The ball was whipped along the line at every opportunity and poor tackling by Quins allowed the visitors to run in four splendid tries. Tiddy got the first two and Allison weighed in with a pair. The bustling full back crowned a fine game by kicking three conversions and a penalty. The pick of a disappointing Quins team were Robert Taylor, Peter Evans, Jeff Williams and Graham Walters.

Metropolitan Police, in a fixture to celebrate the ‘Quins’ Centenary year, gave a dazzling display in the second half to wipe out Carmarthen’s lead of four points and run out easy winners. The police had a huge pack and controlled the rucks, mauls and scrums. They possessed strength at centre and considerable pace on the wings. Full back Roger Allison had a storming game scoring 22 points – two tries, two penalty goals and four conversions. England’s under 23 wing, S.B.Tilly scored three tries.

Carmarthen played extremely well in the first half and tries came from Richard John and David Dyer with Gary Baker converting one and kicking a penalty goal. The Quins play their next match against Loughor in the semi-final of the West Wales cup at Hendy on Friday evening.