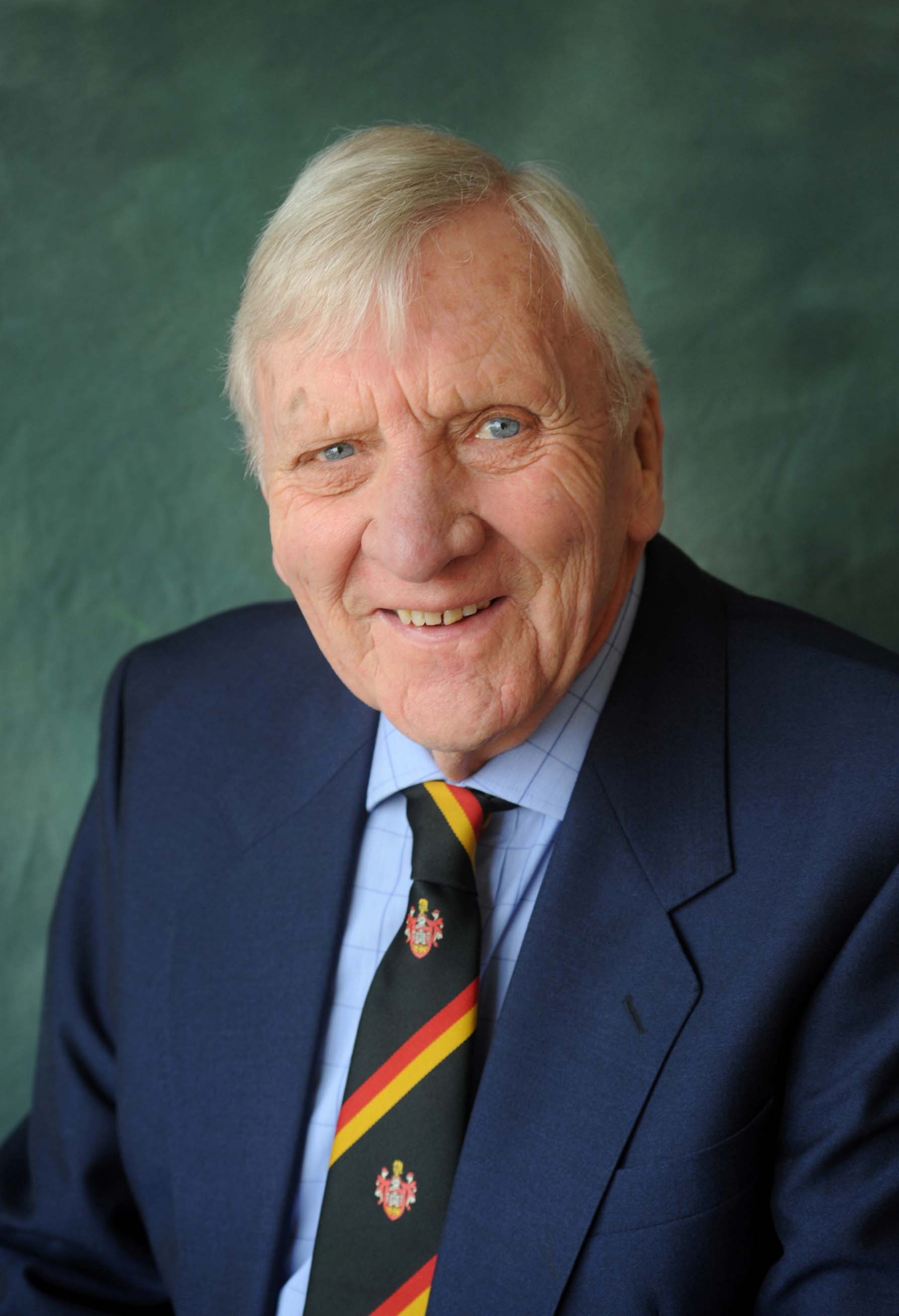 Calvet will be well known to most players, committee and supporters who had links in one way or another with the Quins between 1970 and 1995. This profile for today’s match programme is a tribute to Calvet for his outstanding contribution to the club’s day to day business and the fortunes of its three rugby teams during his period as president of Carmarthen RFC.

Calvet, now aged 76, was born and brought up in Llandeilo. Calvet’s father George was a librarian at the local Public Institute where he was also often seen in his leisure time enjoying a game of snooker. George was in fact quite an accomplished snooker player who, had he been around today, could well have tried his hand at the professional game. Calvet himself enjoyed a game of snooker and in 1961 was invited to play against John Pullman during an exhibition evening at the Carmarthen Jubilee Club. Although he failed to win, he gave a good account of himself with Pullman, having been frustrated by Calvet’s clever safety play, eventually going on to win.

Calvet attended Llandeilo Grammar School and played scrum-half for the school’s under 15’s. Calvet went on to play scrum-half for Llandeilo Youth XV and remembers playing a game against Carmarthen Quins Youth at the park. The game was played before a match between Carmarthenshire and Breconshire and most of Calvet’s recollection of this match was the atrocious condition it was played in and the fact that his team lost.

Calvet lived in Longacre Road when he moved to Carmarthen and worked as a dental technician at Bertram Rees the dentist for some twenty years. Calvet’s son Phillip is still in town and runs his own hairdressing business in Mansel Street. Calvet’s daughter Kate and her family live nearby in Meols.

Calvet will be well known for his business ventures and especially the 24 years he spent from 1971 as co-owner with Glyn Davies of the Lyric Sports Shop. Many players (myself included) and committee members, would pop in for a chat about the club’s fortunes on the rugby field the previous Saturday. It was also where many players from the local area involved in various sporting activities would look for a good deal from Glyn and Calvet for new kit.

Calvet became president of Carmarthen RFC in the 1970/71 season. Calvet was told during his early tenure as the club’s president by Bill Clement, Secretary of the Welsh Rugby Union that he was in fact the youngest president at that time of any rugby club in Wales affiliated to the Welsh Rugby Union. He was instrumental in organising the first 150 Club monthly draw for the Quins which we all know is still going strong today. Calvet remained as president for 10 years handing over to Bob Jones in 1981. Bob was president for three seasons but Calvet took on the role again in the 1988/89 season and remained president until the end of the 1993/94 season. This meant that Calvet had been the club’s president for a total of 17 years. As is the situation with our present president Mr Brian Jones, Calvet was very much involved in the week to week activity of Carmarthen Quins and was always to be seen in both home and away matches. Calvet was also a member of the County XV Committee and recalls being involved in the late 1970’s in partnership with the Welsh Rugby Union in arranging a match between a Carmarthenshire XV and a North Wales XV to develop rugby in the North Wales area. The game was played on the Bangor University campus with the visiting team staying in Colwyn Bay.

This was a period of time of great change for the club and there were times when Calvet and other committee members were under a great deal of pressure, especially in re-locating the club’s headquarters from its original location in Bridge Street. Calvet never wavered from the challenges presented to him and must be given credit, along with other committee members, for seeing the club, which has now been in existence for 136 years, through what was then a very stressful and difficult period of time. Calvet was made a life member of the club in 1996.

Calvet now lives with his wife Margaret in the Wirral having moved there in 2000. He has become a keen bowls player and plays crown bowls regularly for the West Kirby team (daytime) and the Meols Crown Bowls team (evening matches). Calvet still keeps in touch with many of the friends he made at the “Quins” and also keeps a regular check on the first team’s weekly progress by ringing the club at 4.30pm each Saturday to find out the result of the match. He actually telephoned the club one year following the club’s first game of the season whilst on holiday in Florence in Italy. Margaret was not amused!

Calvet is always guaranteed a warm welcome whenever he returns to Carmarthen and we are honoured to have him with us today in our home fixture with Cross Keys RFC.