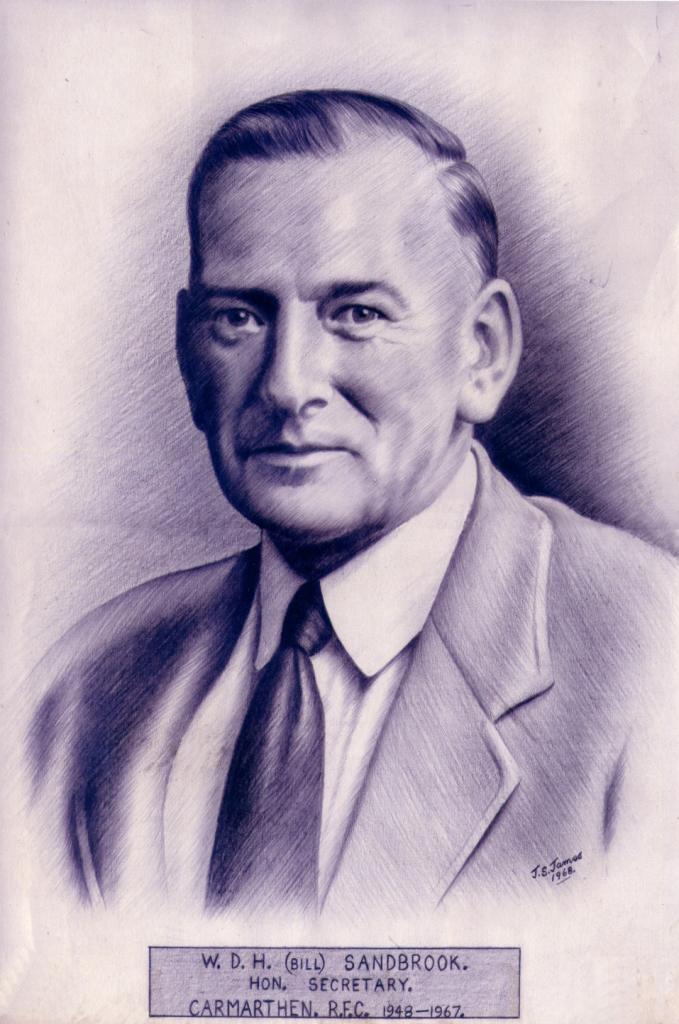 William (Bill) Sandbrook was born in Goodwick, Pembrokeshire on the 19th January 1908. His father, Thomas Sandbrook, was the second son of a farmer. As was the convention at the time, younger sons had to fend for themselves whilst the eldest son took over the farm. As a consequence of such tradition, Thomas Sandbrook joined the Great Western Railway starting his career in Fishguard then to work in Gwaun-Cae-Gurwen. He was at this time involved in rugby administration as an officer of the West Wales Rugby Union. Thomas and his family moved to live in Carmarthen where he became Station Master, making their home in the Junction House at Pensarn. Thomas Sandbrook was to be the First Honorary Member of the Carmarthen Jubilee Club.

During the time the family lived at GCG, Bill attended Llanelli Grammar School travelling by train daily to and from GCG to Llanelli. It was at this school that Bill took an interest in rugby. His early years in senior rugby were with local teams in the GCG area and later he went on to play for Hendy RFC.

Bill then moved on to Swindon taking up an apprenticeship as a fitter with the GWR. He took up rugby again and turned out for Swindon RFC, Swindon GWR and Gloucester RFC. Bill returned to Carmarthen around 1934 following the depression and major redundancies in the Swindon GWR works.

From 1940 – 1945, Bill served in the Royal Artillery and was posted to Burma where he became one of Wingate’s Chindits. (These were Long Range Penetration brigades who would march into Burma to disrupt enemy communications behind their front lines and prepare the way for the main forces to recapture north Burma). Bill was to suffer greatly from ill health after coming out of the Burmese Jungle. However, his health recovered sufficiently for him to figure in the capture of Rangoon. His time spent in the Burmese Jungle left a permanent mark on Bill in that throughout his life he was to suffer repeated attacks of Malaria.

After returning from the war, Bill became the Caretaker of Carmarthen’s Guildhall. This was a position which brought Bill into contact with numerous influential people and the career of many Quins players will have benefitted from a few good words passed on  to the right quarters by Bill on their behalf.

Bill joined the Quins Committee and became Vice Chairman in the 1946/47 season. He was the club’s Honorary Secretary for the next 20 years i.e. 1947/48 to 1967/68. Having held this position for the Quins for such a long time, the name of Bill Sandbrook for anyone connected with Welsh rugby, was synonymous with Carmarthen Quins RFC. Bill also chaired the Carmarthenshire County RFC.

One of Bill’s many achievements was to persuade the Welsh Rugby Union to hold a trial match at Carmarthen Park. The idea provoked a back-lash from the press in particular J. B .G. Thomas of Western Mail fame. JBG regarded the town as far too low a profile for such an event even claiming the ground as being too small. A late night measurement actually confirmed the park as being bigger than the laws of rugby demanded so they quickly set about to put that right. The trial did go ahead and was regarded as a huge success. Haydn Tanner and Bill Tamplin were just some of the great players of the time who took part in this memorable event.

Bill was to score another hit for the club by inviting a close friend the famous Glamorgan cricketer and Neath RFC player W. E. (Willy) Jones to one of the club’s training sessions.  Willy was to show off his talents to the local lads by converting kicks from in front of the stand in his shoes. Not a bad feat considering the inferior quality of rugby balls used around that time.

Bill’s son David also played for the Quins in the 1950’s and he recalls an incident in his younger days as a rugby player which summed up his father’s devotion and attachment to Carmarthen Quins. Home from university for a week-end, David was packing his kit on the Saturday morning only to be asked by his father what he was up to. David told him that he had been invited to play that afternoon for Carmarthen Athletic RFC. Such was Bill’s opposition to his son having anything to do with the town’s rival rugby club that he told him in no uncertain manner “You are a Quins player and you have to have a permit to play for another team – you are not getting one!”

For those who played with either the first, second or youth XV during Bill Sandbrook’s era at the Quins, they will have fond memories of his warm personality, his approachability, a man everyone respected and fondly described by his son David as a Quins man through and through.