Played centre for Carmarthen Wanderers Football Club in the 1877/78 season. 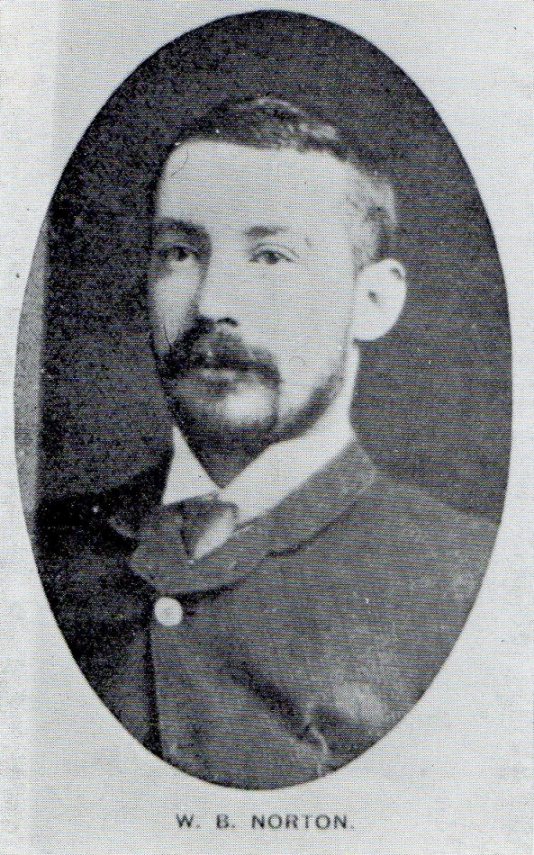 (My sincere thanks to Miss Margaret Evans for her valuable assistance in researching this information for me).

There were 8 Norton brothers but it seems at least two or three brothers may have died very young or just after birth. There were three sisters – Frances/Juliana/Elizabeth:-

The parents were Henry and Margaret Norton. Mr Norton senior was elected as the Town Mayor for Carmarthen in 1859 and 1871. The family’s business interests were in coal deliveries in several parts of Carmarthenshire and in the South Wales Valleys. They also had a brewery in Carmarthen during the late 1890’s but information on this is very hard to come by.

Several of the brothers* played rugby for Carmarthen Wanderers with Derwent Norton being one of only three players from 1875 to the present to have captained the team for a total of five seasons. He has the distinction of being the first ever team captain of Carmarthen RFC.

One match report shows William Barron Norton as having played for the Wanderers in the 1877/78 season when he would have been 15 years old. His other brother Talbot also turned out regularly during the club’s early years.

The following is William Norton’s Obituary in the Weekly Reporter 13th January 1899:-

The many friends of William Barron Norton, who resided for some twelve years in Cardiff, will regret to hear of his death, from pneumonia, in Old Calabar (West Africa) on the 17th ult. The deceased gentleman was the fifth son of ten children – seven sons and three daughters – of the late Alderman Henry Norton J.P. of Greenhill, Carmarthen and was about 37 years of age. Intelligence of his death reached his brothers at Carmarthen this week through the deceased’s London agents, Sir Benjamin Macgregor, Bart & Co. Mr Norton left Queen Elizabeth Grammar School Carmarthen for Shewbrooks’ educational institution, Cardiff, being subsequently articled to civil engineer to Mr. Williams of the Cardiff Waterworks, and afterwards served for several years under the Cardiff Corporation.

Leaving to take up the post of civil engineer to the Manchester Corporation, he stayed in that city for a length of time. He was, whilst there, advised by some friends, to apply for an appointment in the Public Works Department in Africa with the Foreign Office. His communication with the Foreign Office was successful and in August last he was sent out to the West Coast of Africa to Old Calabar to take up an important remunerative post vacant in the Public Works Department. A month ago he wrote home quite cheerfully; the next communication was a wire announcing his death. Great Sympathy.