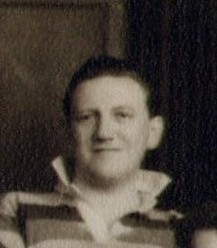 Peter was born and brought up in London and attended a residential school as a result of evacuation during wartime. His parents were evacuated to Carmarthen as a result of bomb damage. He left school at 17 years of age and served three years war service between 1945 and 1948.  He played mostly soccer in his early youth.  He moved to Carmarthen in 1948 and was employed in the health Department and Treasurer’s Department of the County Council.  From the Treasurer’s Department he qualified as a Chartered Municipal Treasurer.

Peter played for West Wales Representative XV and turned out for the Carmarthen County XV on several occasions. He played in the drawn game in the final of the West Wales Cup Competition in 1955/56 (3pts each) and also the replay which the Quins won by 8pts-6pts. Both games were played at St. Helens in Swansea. This was the first time the Quins had won this cup competition.

Peter married Carwen Noble (another evacuee) grand-daughter of George Thomas of Orchard Street – a long-serving railway engine driver and long-time member of Tabernacle Chapel.  They were blessed with a daughter Kimberly in 1963.

The family moved to Kent where Peter took up a post as a college lecturer and as a part-time student of the University of London where he gained a B.Sc. degree in Economics. Carwen qualified as a teacher (Certificate of Education) at the local college.

Peter subsequently became the Head of the Department of Management and Social Studies at Mid-Kent College of Higher and Further Education where he was a Management Consultant and also as a practising Chartered Certified Accountant. Carwen held teaching posts in Kent schools for twenty-five years.

Their daughter Kimberley works for an international library organisation.

Peter is 90 years of age and still lives in Kent. Throughout his retirement as during most of his working life, he has been the owner of a succession of Old English Sheepdogs that have taken the family to many Championship dog shows with seven attendances at Crufts.

Peter tells me how much he enjoyed playing with Carmarthen Quins and the companionship of so many players.  He also told me of the fond memories he has of working in the offices of the County Council in Wellfield Road; Spilman Street and in County Hall.

He has also asked me to express how much he has come to appreciate that as a stranger to town he was so readily welcomed and absorbed into the community of Carmarthen and how much he has missed the town. He is delighted to receive a 200 tie for having played over 200 games for the Quins 1st XV. Sadly we have no records to show the exact number of games Peter played for the Quins but it would most certainly have been in excess of 200 – more than 40 in each season.

Presentation photograph supplied by Peter himself.