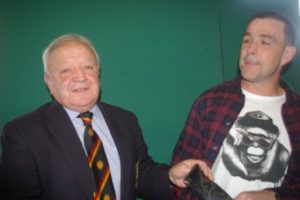 Andrew made 259 1st XV Quins appearances between 2003 and 2013 and is 11th on the list of all time Quins appearances. Andrew being presented with his 200 + tie by Brian Jones, Quins Committee. 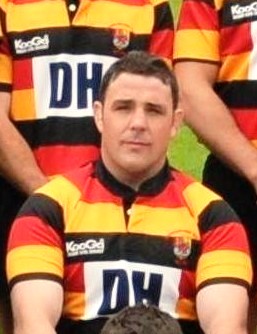 · Played his first Quins game on the 15th August 2003 away to Whitland scoring the first of his 42 tries and had his last game away to Cross keys on the 24th April 2013.

· Was part of the Quins team that won promotion to the Welsh Premiership.

· Has been awarded best “Forward of the Match” more than any other Quins player.

· Awarded player of the season for the Quins and picked up the same award at his previous clubs Trimsaran; Tenby and Aberaeron.

· Has been the only Quins forward to “Drop” 3 goals

· Selected to represent the famous Barbarians against Loughborough College in 2012