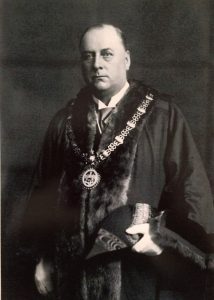 Thanks to club member Mary Thorley for coming across the following two newspaper reports in the Western Mail on Alderman Davies, as they confirm his involvement in local affairs and his time as club president (Jointly with Walter Lloyd).

“Alderman D. J. Davies, mayor of Carmarthen, has been thirteen years on the town council and has proved himself a valuable asset in the public life of the borough. A native of Carmarthen, he is the son of the late Mr Rees, King Street. He was made an alderman twelve months ago and during the past year has acted as deputy mayor, whilst recently he filled the office of borough sheriff with ability for two successive years. He takes a keen interest in sport and was formally an all-round athlete and has had the unique distinction of being elected captain of four clubs – the Carmarthen Town cricket; football; tennis and hockey teams.*

At present he is a president of the Carmarthen Harlequins Rugby Football Club. When the National Eisteddfod was held in Carmarthen in 1911, Alderman Davies was secretary to the general purposes and pavilion committee. He is a Past Master of the St. Peter’s Lodge of Freemasons, a staunch Conservative and Churchman, and a member of St. Peter’s Parochial Church Council. Both he and Mrs Davies are very popular in town. The new mayoress is a daughter of the late Mr W. S. Phillips, who was well known as a wine and spirit merchant in Carmarthen.”

“Excellent prospects for the coming season were reported at the annual meeting of the Carmarthen Harlequins Rugby Football Club. In the absence of the Mayor of Carmarthen (Alderman D. J. Davies), the chair was occupied by Mr J. O. Morgan. Lady Kylsant was unanimously elected patron and the Mayor and Mr Walter Lloyd were chosen presidents.

The club started last season with a deficit of £67.17s 7d. but finished up with a credit balance of £2. 6s 3d. There was one bill outstanding. Mr Trevor Jones (Barnsfield Terrace) was appointed Hon. Secretary with Mr Tom Owen (last season’s secretary), as assistant.”

*Alderman Davies was captain of the Carmarthen Wanderers Football Club in the 1888/89 season jointly with Ned Hughes. He was the town mayor in 1928 and 1929.