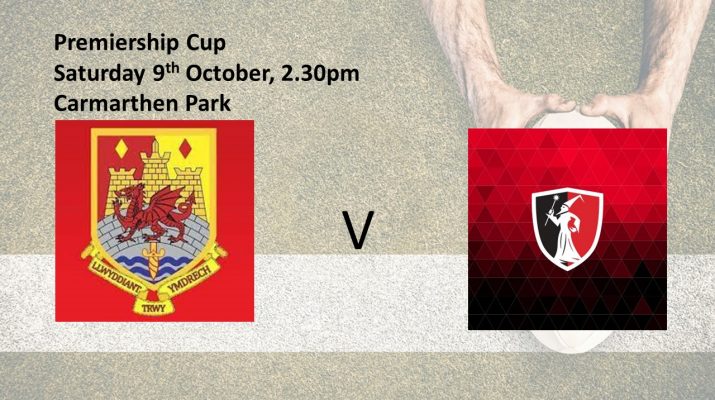 At the risk of stealing media headlines the Quins will be aiming to put a spell on the Wizards when they come to town this Saturday, 9th October. Former Quins player Ieuan Evans scored a classic try against Scotland in 1988 and legendary commentator Bill Mclaren famously said that not even Merlin the Magician could not have done any better and with Carmarthen being the birthplace of Merlin the Quins will be looking for their own Merlin and some magic to take on an in form Aberavon team at the park.

Aberavon have won three from three so far in  the Premiership cup and will fancy their chances against the Quins who have won two and lost one so far in the campaign.

We feel we are yet to see the best from the Quins and hope that Saturday will be the day when it all clicks at the park.

Aberavon lead the way head to head with 26 victories compared to the Quins 15. Aberavon have scored 1018 points including 89 tries during those games against the Quins’ 857 points and 82 tries.

Back in the 2019/2020 curtailed season the teams met each other on just the one occasion with the Quins running out winners at the Talbot Athletic Ground 34pts to 29pts in a pulsating game. The Quins points came from a penalty try and tries from Torin Myhill, Josh Batcup and Lewys Millin and 3 conversions and 2 penalties from Steff Marshall.

Looking further back 20 years ago in the 2001/2002 season in the old Welsh National League Division One honours were shared between both sides. At home in  the Park in on October 2001 the Quins won 22-19 with a try from Deiniol Evans and the rest of the points from the club points record holder Giles Thomas  (GT) who chipped in with 1 conversion, 4 penalties and a drop goal. Later that season in January 2002 the Quins fell to a 22-18 defeat with the boot of GT kicking 6 penalties.

The following year the Quins took on Aberavon in three games. First up was a cup game where Josh Freeman raced in for a try and of course GT supplied the remaining points through one conversion and two penalties that saw the Quins win 13 -12 to progress to the next round. In the League games the results were close and shared between the two sides. On Valentines Day in the park the Quins ran out winners 22-21 with the points scored by Emyr Jones (2 tries) Paul Matthews (1 try), Barrie Thomas (1 conversion) and GT (1 conversion and 1 Penalty). In the away game the Quins fell to a 32-26 defeat with tries from Richard Rees and Gareth Williams and the rest of the points from yes you guessed it GT.

The results and memories from the games above whether victory or defeat will certainly whet the appetite for Saturday in what will be a keen hard contest as it always is and could be seen as a must win game for the Quins so that they can keep within that coveted top two teams.

Your matchday 23 for the game is: 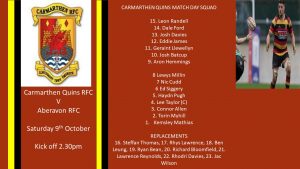