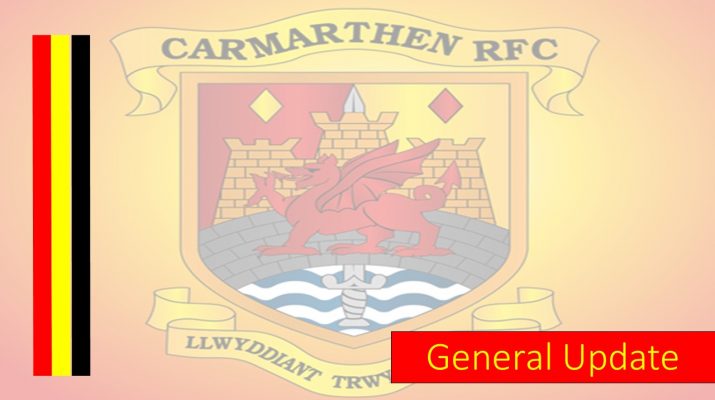 This week and weekend is as big an event that the club has seen for a while. Rugby across the whole club features between yesterday evening (Wednesday 6th April) through to Sunday when all our players are in some sort of action.

Last night the return of the Jesters Hub continued with many girls from under 7’s through to under 18’s taking part in fun sessions focussing on the core rugby skills and there were smiles all round. There is still plenty of space for you to join and for more details follow our Social Media channels or email d4ddo@hotmail.co.uk

Tonight the competitive rugby kicks off with our Under 11’s playing against Carmarthen Athletic in what is always an entertaining game full of skills from both sets of players.

On Friday (8th April) the local rivalries continue with our Youth Team hosting Carmarthen Athletic in a double header that serves as a cup game and a league game. The teams have met once this season with the Quins running out the victors. As always with local derbies this could go either way as both sides fight for the Town Bragging Rights. Kick off in the park is at 7pm and the more support there the merrier.

Saturday our 1st XV continue their road to the end of the season with their last away game of the campaign. They head East to Ebbw Vale looking to build on their last outing which saw them secure a bonus point victory in Merthyr. Its been a long stop start season but the Seniors will be looking to end the season on a high and as high up the table as they possibly can.

With the starters finished on Saturday the club moves on to the main course with the Carmarthenshire Cup Finals day in Llandeilo RFC where four of our Junior sides are in action in Cup Finals. It is an unprecedented success for the section having so many teams in the finals. Only the 14’s missed out and that was probably due to a bad run of luck on the injury front but they will look to bounce back next season.

The first game to kick off is the Under 12’s who will take on Newcastle Emlyn at 10am, followed by the Under 13s who take on Amman United at 11.30am, then the Under 15’s take on Lampeter at 2.30pm and last but not least the Under 16’s take on Llandeilo kicking off at 4pm.

In what is going to be a great day for rugby all round any additional support would be welcomed by all teams.

There will be team news brought to you from some of the sides prior to the games which after a harsh two years of Covid will be a memory in the making for the young Quins.

Also on Sunday our Under 7’s and Under 9’s take on the Athletic and Athletic Park both kicking off at 9.30am.

With the club’s 150th Anniversary on the horizon it is great to see so many players involved with club and it is continuing to grow. If you like what you see or hear then why not become part of it there are opportunities for many so please get in touch.