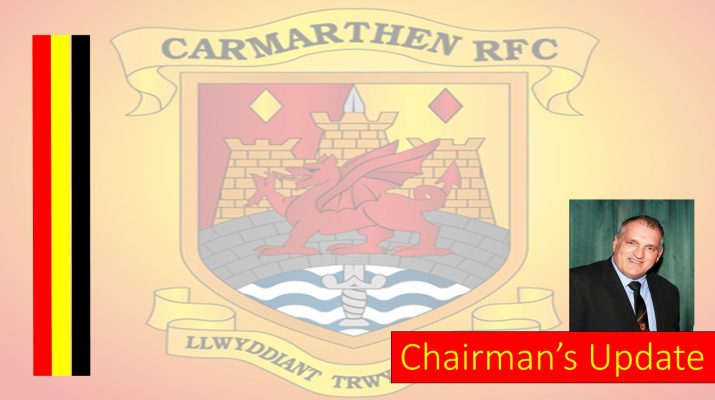 Hello to all our supporters and their families. Well we end the year almost in the same situation as we did last year, under restrictions. We can all be thinking when will it ever end! After a few months of being able to see you and speak to you at the park or in the clubhouse a new variant of coronavirus has scuppered that, at least for the time being.

As you know the Boxing Day derby game against Llandovery has been postponed and we await further guidance from the Welsh Rugby Union on future fixtures and whether they will go ahead behind closed doors as stipulated by Welsh Government. When we have more news on  this we will bring it to you on all our media platforms.

Its been a turbulent year just as 2020 was but we have come through the other side albeit with a struggle sometimes. Thankfully we have seen some rugby and our seniors have had some good victories that see us currently lying third in the table and in the cup quarter final draw. Let’s just hope that we can continue with the season but only with the safety of the players in mind. Our newly formed youth team are also performing well and are giving a good account of themselves in all games against some bigger and older teams.

Our mini and junior section continue to thrive with vast numbers and through the dedication of a small committee, coaches, team managers and parents alike we hope that the conveyor belt of talent continues.  Our under 12’s, 13’s, 15’s and 16’s are all through to the Carmarthenshire Cup Semi Finals with the under 14’s in the Plate semi finals. We hope that rugby can return early in the new year to allow these fixtures to take place. I am sure that when they do may supporters will be there to cheer you on.

Over the past year the club has unfortunately lost some of its members and it is with sadness that we remember them but we must also remember them with fond memories especially for what each of them did for the club in their own way over the years.

My thanks must go to the Committee who have worked tirelessly over the months to ensure the club was ready to open when it was able to and of course to the Mike and Cath and their staff for the work they have done serving us when  they were able to . To all the players, coaching staff and management across the age groups my personal thanks for getting on with it when you can and putting the rugby on for us. Thank you all.

Finally, I would like to sign off and say I hope all our supporters and their families have a very Merry Christmas and a Happy and Healthy New Year and I hope to see as many of you sooner rather than later.