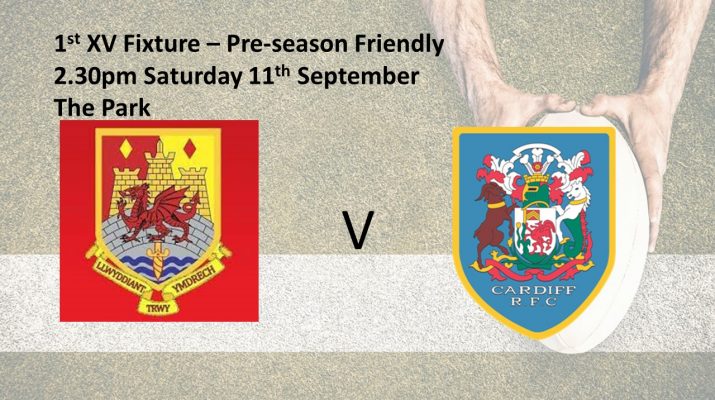 After what can be considered a very successful pre-season so far  and preparations are complete for the last pre-season fixture which sees Cardiff visit the Park.

Head to Head the teams have met 31 times with the Quins winning 13 and Cardiff 18. Quins have amassed 644 points including 64 tries and Cardiff 722 points including 90 tries. For Quins fans there will be two performances that will stand out in the memory for years to come.

Firstly we go back to February 2005 when Cardiff came to visit to play a cup match in the then Konica Minolta Cup. Cardiff that day were captained by Rob Appleyard who later became head coach of the Quins. In a tight hard fought game it was the Quins who emerged victors 17 points to 11 thanks to tries from Emyr Jones and Ricky Richards, two conversions from our current head coach Craig Evans and an outrageous drop goal from hard man flanker Andrew Thomas.

Secondly we don’t have to cast our mind too far back but two January 17th 2020 and a televised match live at the park. With a great atmosphere building before the game with the Under 10’s teams from the Quins and Whitland RFC acting as a guard of honour there was a confidence in the Quins camp. As always the games against Cardiff are extremely difficult and after 20 minutes it got harder for the Quins with Jac Wilson receiving a red card but the squad were galvanised by that and it appeared that lady luck was sat with Phil Steele that night and everything went right for the Quins. Not only did they secure victory they managed to get a bonus point with scoring 4 tries. The final score was Quins 29 Cardiff 7 with the scorers Javan Sebastian 2 tries, Jonathan Evans 1 try and Josh Batcup 1 try, 3 conversions and a penalty. The victory kept the pressure on Cardiff who were league leaders at the time in the season that will forever now never be completed.

Looking ahead to Saturday we caught up with Head Coach Craig Evans on his thoughts on how pre-season has gone so far, here is what he Craig had to say:

“We are in a positive place, we’ve come away with 3 wins from our 3 pre-season games to date which is always good to build confidence, but more importantly the performance of the both the team and some individuals has been excellent, but as always we still have plenty to work on and lots of scope for improvement across the board.”

“As is the nature of the game, we have picked up a few bumps but that has allowed others to step up and stake their claim for the Jersey.”

“Aberystwyth, Chinnor and Llandovery have posed us stern and different challenges and Cardiff this weekend will be no different. I’m sure they will be looking to finish their pre-season in a positive fashion as will we, another W to finish off will give us plenty of confidence going into the Cup competition.”

“The squad have again worked hard this week and this week will also see us have some of our Scarlets contingent to join us for the first time this season. We hope that as many of our Supporters can come and join us at the Park for the game and back at the Club afterwards for some refreshments, hopefully celebrating a good performance and another win.”

With the squad announced Team Manager Steff Thomas reflected on the work done throughout the club with development of players “We’ve mixed the squad up this week with some of our Scarlet contingent available and still a few knocks in the squad. ”

“What is pleasing for us is how the club has developed some of these players. Four of the match day squad have come through either of our Mini and Juniors or the Youth. Eddie James, Steffan Thomas, Jac Price and Dylan Richards and add to this Tom Jones who played scrum half last week and you can see development of talent is key for us as a club.” 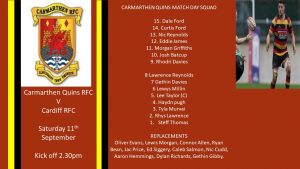 Entrance to  the park is free on Saturday and we hope that as many of our supporters can attend.