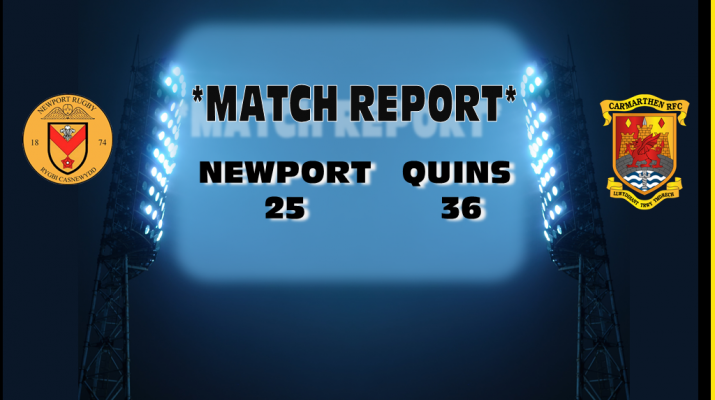 In this, the opening round of the National Cup, the Quins were faced with a daunting task, against a Club that has the best record against the Quins, of any Premier outfit.

Of the 26 matches played we have only won 7, and just 3 at Rodney Parade. Having performed well against two top English Clubs in preseason matches, their optimism was shattered as early as the first minute when Josh Skinner darted through for a try which Matt O’Brien converted.

Many a side would have dropped their heads, but back stormed the Quins for live wire scrum half Ifan Beynon-Thomas to make a brilliant break to cross for Steff Marshall to level matters after 6 minutes. After 15 mins O’Brien slotted a 35 meter penalty restoring the home sides lead. The Quins pack had settled the quicker and from a line out and driving maul, Torin Myhill to be credited with the touch down. Steff Marshall converted to restore the Quins advantage. after 20 minutes. Five minutes later John Morris crossed for the home side for O’Brien to convert. Right on half time O’Brien increased the home side lead with his second penalty.

The half time talk certainly had its desired effect as the Quins came out fighting and had the home side in all kinds of trouble and Steffan Marshall reduced the deficit with his first penalty, but against the run of play, the home side scored their third try which went unconverted. The Quins quickly responded with their second Steff Marshall penalty. On the hour mark the Quins power play was again seen to great effect and Ben Leung crashed over for Steff Marshall to add the points.  The Quins were by now on top and the Rodney Park outfit had little to offer.

More pressing by the Quins saw play encamped in the home 22 and their control resulted in Torin Myhill going over for his second try for Steff Marshall to convert. This two score lead was added to, when Steff Marshall put over his second penalty to well and truly see the Quins through to the next round.

The all round team effort was a credit to all the preseason training and the squad are gelling into a formidable outfit that will surely worry all the other sides in the Premier. Next Saturday the team travel to Sardis Road for their opening League match and hope to reproduce their dazzling winning display there last season.