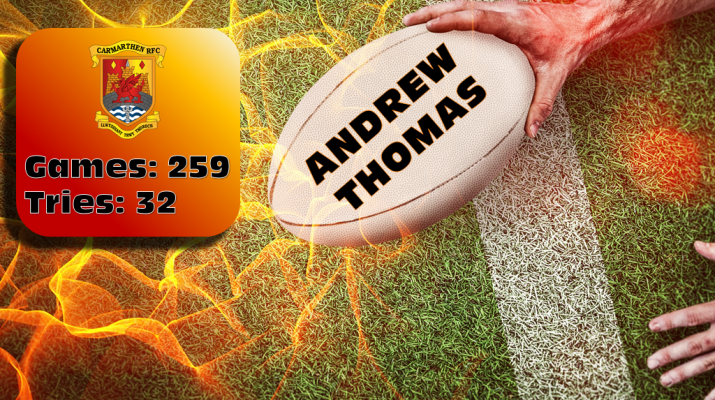 Andrew joined the Quins in July 2003, when we were promoted into the Premier Division, after spells with Tenby, and Aberavon. When with the ‘Wizards’ he gained more ‘man of the match’ awards than any of their other players, and went on to emulate that honour with the Quins. Many believe that if records were kept, he would be the leading contender for the whole Premier Division and it was for this reason that he was selected to play for the world famous Barbarians.

His opening League match was against his former side, Aberavon, at the Talbot ground on Sept 6-03.  He crossed for two tries in the Park against Ebbw Vale in the Park on Nov 11-03 and went on to score 30 more tries in his ten seasons with us. In his opening season he played in the Tovali Cup winning team against Llangennech, 29-10, and Dropped a goal up in  Ebbw Vale, and went on to play in 21 Premier Division matches that season. In his second season,  on Sept 11-04, he played a major part in  that amazing night at Sardis Road, in the drizzle the Quins ran out winners by 23 points to NIL. The nil was the first time for the Ponty side to fail to register a point on their hallowed turf, in living memory. The eleven days between the 11th and 22nd of December-04  were memorable for us and Andrew, as we were the only side to complete the double over Pontypridd that season with a home 28-13 win in the Park, a week later we registered  our record Welsh Cup victory with an 81-0 win against Tredegar Ironsides and Andrew scored two tries, and four days later we beat Pontypool in the Park, 34-0. He scored 2 tries against Swansea on Feb- 2- 04, and his SECOND drop goal a week later against Cardiff in the Park. He went on to play in 28 Premier matches that season.

With just 9 wins in season 05-06, relegation was inevitable, but again we managed a win against Pontypridd in the Park by 32-15.

We finished runners up in the then Division 1, with Andrew playing in 21 Leagues games. And he slotted his 3rd Drop Goal down in Narberth to win 26-23. Runner up again in 07-08 with Andrew scoring 7 tries and playing in our Tovali Cup victory against the Athletic and crossing for a try.

In the following Season 08-09, we lost only one League game to Tonmawr 3-5 and regained promotion back to the Premier. Andrew scored THREE tries in our Cup victory over Maesteg Quins and went on to score another 5 tries, helping us get back in the Premier. He played in the third  consecutive Tovali Cup victory over Loughor 4 April 2009.

After an average 2009/10 season, Andrew played in all our Cup matches, Athletic, Blackwood, Glamorgan Wanderers all Away , up to that never to be forgotten Semi Final at The Brewery Field, and he played a huge part in a 41-12 thrashing of Pontypridd. And on to the Millennium for the Final. We were desperately unlucky against Llanelli.

Season 2010/11 was not one of our best, but again we beat Pontypridd but without Andrew who was injured, but the season saw Andrew play his 100th Premier Division match up at Tonmawr and end his season with 2 tries up at Llandovery.

Season 2011/12 saw him pass another land mark by playing 200 league matches for the Quins, a rare feat these days, and crossing for 4 tries, and yet another victory over Pontypridd in the Park, his 5th win over them, not many, if any players have achieved this in their careers. He played 259 times for the Quins in all categories and score 32 tries, a magnificent record and he will always be referred to as a true MIGHTY QUIN.