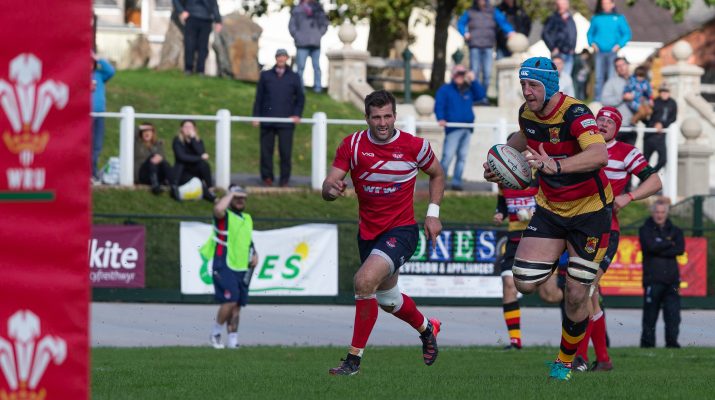 It was a bright sunny afternoon with a blustery wind coming in from the town end but the first derby of the afternoon was set, kicking off early due to the second derby at Parc y Scarlets between Scarlets and Ospreys at 3pm

With 6 changes to the starting line up after the victory against Bedwas last week, the squad looked set for an afternoon of running rugby.

Llanelli got the game underway, with the strong breeze at their backs. From the off the Quins looked to continue where they had finished last week, moving the ball across the backline with swift hands between centres Josh Batcup and Nick Reynolds setting Dylan Morgans up the touchline only for Llanelli to be penalised at the breakdown in the first 5 minutes. Jac Wilson’s first penalty opportunity was a successful one to get the Quins on the scoreboard.

The scoreboard remained unchanged in the first 20 minutes as both teams fought hard in both attack and defence. The Quins pack were dominant in the scrum and led to Scrum Half Gareth Rees looking sharp in attack from a quick tap penalty only to be turned over. The Quins lineout was not at its best and an overthrow set Llanelli on the attack in the 22ndminute. Keeping the ball and pressurising the Quins try line Llanelli blindside Flanker Joel James picked up from the base of a ruck to be driven over from close range to get the opening try of the match. The try was converted by Outside Half Jonny Lewis.

Quins were made to make an early substitution with Scrum Half Gareth Rees taking a knock to the head and was replaced by Liam Davies on 30 minutes. Quins kept working hard into the wind towards the end of the first half and were rewarded with their first try on 37 minutes when substitute Liam Davies spotted a gap on the blindside and went over in the corner. The conversion was unsuccessful from the touchline. Llanelli’s indiscipline at the breakdown eventually cost them with Joel James receiving a yellow card on the stroke of half time. Quins went in at half time with a 1 point lead 8-7.

With Llanelli down to 14 men the Quins came out to start the second half with the wind behind them and looked to start where they had finished the first half. With only 3 minutes of the second half gone Quins secured their second try through great hands and finished off under the posts by Shaun Jones, Jac Wilson converting. Quins were now leading 15-7 and had the wind at their backs but basic handling errors and turnovers were stopping the Quins momentum. The lineout continued to malfunction in key areas and this was now a concern as the second half progressed.

Jac Wilson converted another penalty on 52 minutes to take Quins two scores ahead. With the continued handling errors and turnovers in the second half Llanelli kept the pressure on. Llanelli were back down to 14 men in the 58th minute as Centre Oliver Reyland was yellow carded for an offside offense. The arm wrestle was continuing and 8 minutes later, teams were even as Quins substitute Gethin Robinson received a yellow card.

With just over 10 minutes to go Llanelli kept the pressure on and from another misguided lineout Llanelli took advantage with Number 8 Nathan breaking through to go over in the corner. The conversion went astray and now Llanelli were back within one score.

Llanelli kept hold of the ball playing into the wind and kept the pressure on in both attack and defence. It was in the 75th minute they were able to find a gap in the Quins defence for young outside centre Joe Roberts to go over bringing the score to 18-17 to Quins. It was a pressure conversion for substitute Ashley Sutton which he converted to take Llanelli ahead again 19-18.

The Quins came back at Llanelli in the closing stages but again the handling errors and turnovers cost us the game.

So it is back to the training ground to rectify the wrongs in readiness for our next fixture away to Aberavon RFC on Saturday 13th October – Kick Off  2:30pm