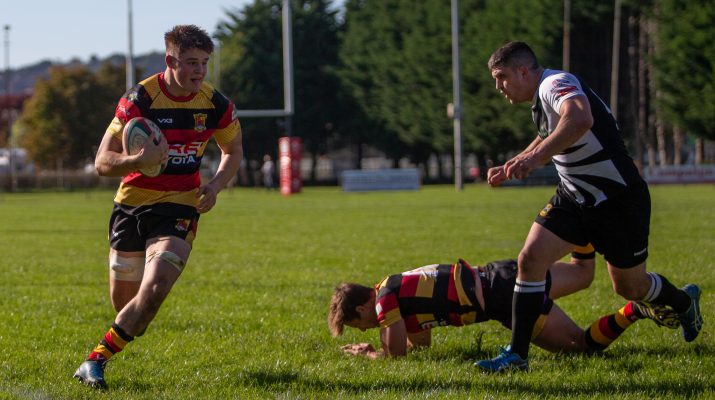 The same as last season, a shaky start as in Llanelli but thank goodness they recovered.

The Quins side included only two players who had not played in the Park, with Haydn Pugh at the helm and Ellis Lloyd starting his tenth season. The opening set piece gave the Quins eight the chance to demonstrate their scrimmaging power and win a penalty, and minutes later Aled Thomas narrowly missed a 35 meter penalty, Dylan Morgan gathered out of defence and tore through visitors defence only to be stopped near the Newport line, and he repeated this scare minutes later, only to be halted once again by desperate defending.

A Newport attack was halted in the Quins 22 and from the resulting counter attack play was taken up to the visitors line. From the scrum that followed, the Quins control enabled Lewys Millen to pick up and shrug of two tacklers to crash over for a try. Aled Thomas converted. These early signs looked promising as the Quins set piece and line out were settled and this gave fly half Jac Wilson chances to gain ground with his boot.. The Black and Ambers were always willing to move the ball around and from such a move the ball was passed around several players giving Matt O’Brien the chance to cross under the posts. He added the points himself.

Rubbing salt into the wounds, minutes later a similar passing bout resulted in O’Brien crossing for his second try and again add the points. The visitors changed end 14 -7 ahead. The Quins looked dejected and despite their enthusiasm there was no method in their attacks with loose passing letting then down.The Black and Ambers were now in confident mood and added two more tries through T Pascoe and K Taylor for O’Brien to convert one and add a penalty with the last kick of the match.

It was a disappointing performance and the team must learn to be patient in their approach and use their obvious talents to better use. With Cross Keys the visitors to the Park next week, more concentration will be needed in this important season