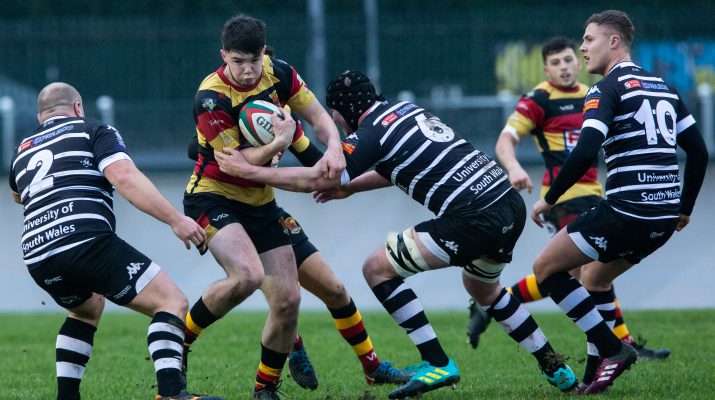 The Quins made four changes from the Ebbw Vale match, to take on 2nd placed Pontypridd on a wet and miserable afternoon.

Almost from the kick-off the Quins were awarded a penalty only to see Aled Thomas kick sail inches wide. The Quins pack were up against a heavier and more experienced eight but soon settled and were able to win their own put in at both line out and set piece, and after 10 minutes Aled Thomas put the Quins ahead with a 35 yard penalty.

Jac Wilson was able to nurse the touch line which gained valuable ground, and Haydn Pugh and Josh Helps were able to take more than their share of line outs, the visitors were denied good possession and posed no serious threat. It was 25 minutes into the game before Ponty were able to win a line out in the Quins 22 for wing Corey Howells to cross for a try  and Lewis  Williams to add the extra points,

As has happened in many Quins matches this term, this set back seemed to spur them on, and after a move started by Dale Ford in his own half, and several Quins players handled to see Osian Knott start a run that emphasised the threat he has promised, and his dummy pass fooled the covering defence for him to waltz over near the posts for Aled Thomas to regain the lead with his 35th min conversion. Just on half time Aled slotted over his second penalty to give the Quins an interval lead of 13- 7.

The Ponty outfit are not a side to lie down and Lewis Williams converted two early penalties to level matters, and after a Quins Yellow card, it seemed the visitors had broken the Quins resilience. Not the case as they knuckled down with powerful work by their pack, the ten minutes passed without any addition to the score, and the visitors very rarely pass up a chance like this, so credit must be given to the Quins defensive qualities.

Ten minutes from time Williams held his nerve and with the help of the upright, he put over his third penalty to give the visitors a slender lead. The final passages of the match saw both sides strive to add to their scores, but sound defences took the honours and the final whistle heralded a narrow Ponty victory.

The loosing bonus point keeps the Quins in eighth place and after this fine performance against a dangerous Pontypridd side, who knows what the future holds for this young Quins team.

The next match will be televised live on BBC ScrumV next Friday away at Merthyr Kick Off 7:10pm , and all will remember our outstanding win up there last season so let’s hope for a similar performance.