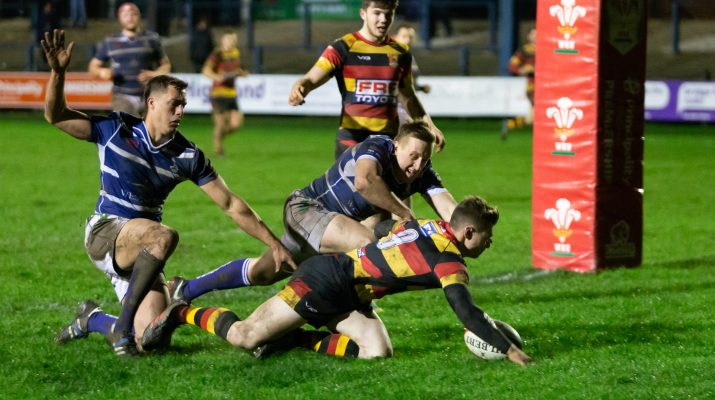 In a week where events off the field stunned and amazed most Welsh Rugby people, the game must go on.

On a wet and windy Brewery Field, both sides had reasons to gain a victory. The home side to ease any relegation threats and the Quins to consolidate their League place. The match turned out to a far from spectacular affair, and when each side took the lead, their tactic was to keep the game tight, which did little to enthuse the decent crowd.

An uneventful opening 15 minutes  lead up to a home penalty taking play to near the Quins line. From the possession gained by the Ravens, Ben Jones was credited with the touch down. Owen Howe added the conversion. From the restart a well judged kick off by Jac Wilson was caught by a Quins player, enabling the Quins pack to surge up to the home 22, and a quick heel led to Jac Wilson in space to glide through for a brilliant try. He converted his try to level matters. The teams defences were kept busy and were on top for the next 15 minutes before Owen Howe broke the deadlock with a penalty. The remainder of the half was dominated by the forwards  with little to get excited about.

Three points behind with the elements behind them promised a change of fortune for the Quins, and they opened strongly leading to play going from left to right at pace. After 48 minutes a controlled period of play led to the Quins moving the ball from the right touch line to the middle and Osian Knott was put clear, he neatly chipped over the covering tacklers and caught his own kick, he raced into the Ravens 22 and an inch perfect kick ahead saw  Aron Hemmings  use his tremendous pace to win the race to touch down for the games best score. Jac Wilson put the Quins ahead with the conversion.

The Quins set piece was more than holding its own but very uncharacteristically their line out was letting them down and after three misguided throw ins they put themselves under pressure and what should have been additions to their scoreline failed to materialise. This led to the home crown urging their favourites to greater things and sure enough with some dubious penalty decisions, this led to Howe adding three penalties to their total and  a somewhat lucky victory.

The effort was always there but unfortunate mistakes and the weather conditions took their toll. The final minutes kept the Quins on the Ravens line, but the greater experience of the home side kept them out and the left with just a losing bonus point. This keeps the Quins 18 points above the fifth from bottom side with games running out , just six matches remaining.

An interesting few weeks ahead as most of the bottom Clubs have to play each other, so the dog fight goes on. Derek King the Ravens chairman explained many interesting facts in his programme address.

We now have a break from the league next weekend as we all get behind the National for their game against Ireland at the Principality Stadium where the Triple Crown, Grand Slam and Championship are all at stake.

Join us in the Clubhouse on Saturday 16th March for a day full of International Rugby: