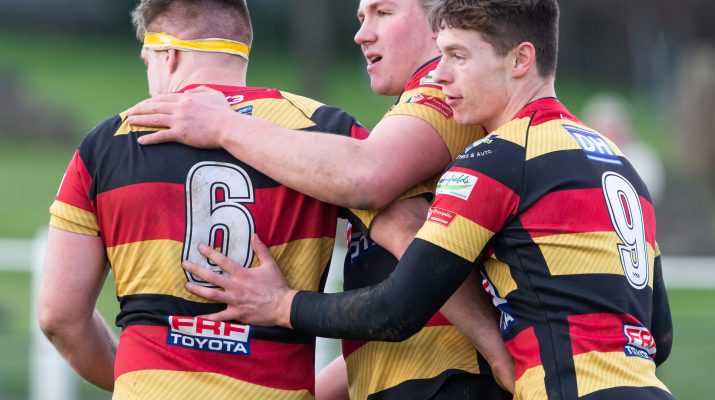 Quins Head Coach Emyr Phillips made six changes from the narrow Cup defeat heralded a must win approach, and as in most matches both sides tried to settle early, but after just 3 minutes the Quins went ahead with an Aled Thomas penalty.

This was followed by a period of  both sides attempting to move the ball with defences getting the better of things. After 17 minutes a Quins attack was thwarted and the visitors were quick to counter with several players handling to put James Leadbeater away to cross for a well taken try, Josh Prosser added the extra points. The Quins were quick to react and after several dangerous attacks play was camped in the Bargoed 22,.From a line out, the Quins control sucked in the visitors defence and Steff Marshall had amble room and time to put in an accurate cross kick to the Vicarage corner for Aled Thomas to gather and go over for a text book try to retake the lead after 25 minutes. His conversion was just wide.

The visitors were pinned down in their own half and from a charge down the Quins were awarded a penalty for Aled Thomas to increase the Quins lead. Prosser managed a penalty to narrow the lead after 32 minutes.  The patience of the Quins control kept play in the Bargoed half and the action was moved from left then back to the right ,keeping the visitors defence on their toes, but such was the Quins possession that a score had to develop and sure enough after 39 minutes the overlap was found out right for Dale Ford to race over.Aled Thomas converted to end the half with the Quins  ahead 18-10

The Quins eight were getting the better of things and play was switched from side to side and the visitors defence were kept at full stretch. Steff Marshall was able to find the touch line with long probing efforts, keeping play in the Bargoed half and this gave Osian Knott the space he used well and he went over for try number three. Aled Thomas slotted the conversion. The home side were in full control and kept their supporters satisfied with penetrating runs and power plays.

From yet another team effort play was forced into the visitors 22 and the ever improving Lewys Millin was on the end of a charge to score the bonus point try for Aled Thomas to convert. The Quins were well on top and plenty of ball movement gave their backs the  action that pleased their supporters, which led to another skilful bout of play that gave Torin Myhill the room to dash over for try number five, Aled Thomas added the extra points taking his tally up to 19 points.

All credit must be given to Bargoed as their never say die attitude gave Josh Howells the chance to find a gap to cross for a well-deserved try for Rosser to convert. The final ten minutes saw both sides open play at all times and this was a fine example of the skill ,intensity and  spirit of the Premier Division.

Other Premier Matches highlighted the fine example of what the Division has to offer and develop and this must be stressed to the people who say otherwise. This victory increases the gap between the bottom five Clubs and with five fixtures against sides below them the Quins must feel well on target to survive.

Next Friday we travel to the capital to face an encounter with Cardiff RFC who in fine form.