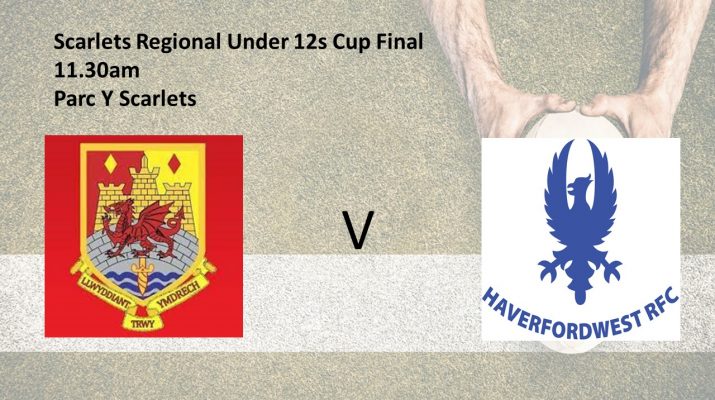 All roads lead to Parc y Scarlets this coming Sunday for our Under 12’s. The finale of their first competitive season and what better way to round off the season with a trip to the stadium to play Haverfordwest in the Scarlets Regional Final.

The Quins have played 21 games this season of 15 a side and have competed well in all games losing just four against Burry Port, Tycroes, Newcastle Emlyn and Bargoed. The first game they played at 15 a side was also in fact against Haverfordwest way back in September when the Quins ran out winners 24 points to 7 points in Abergwili. Both teams have no doubt developed over the season and Sunday will be an evenly contested match.

Back in the Carmarthenshire Cup the Quins got to the final beating Llandovery 12 nil in the preliminary round before beating Penybanc 53 nil in the Quarter Final and Felinfoel 33- 5 in the Semi Final. On to the final where the Quins took on Newcastle Emlyn and with the game edging towards the end and the Quins down 22 points to 12 with 8 minutes to go they really dug deep and scored two outstanding tries that were duly converted to take the win 26 points to 22 points in the last minute. It was testament to the squad that they dug deep and did not give in.

The preparation this week has been good and the squad have been sharp in training working on their basic skills ready for one last push on Sunday. The last time the Under 12s Regional Cup Final was played pre-covid our current Under 15’s walked away with the trophy something that the class of 2022 want to emulate.

Kick off at Parc Y Scarlets is 11.30am and we know the squad will appreciate any additional support.

Your Match Day Squad for the Regional Cup Final is: 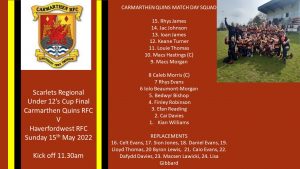