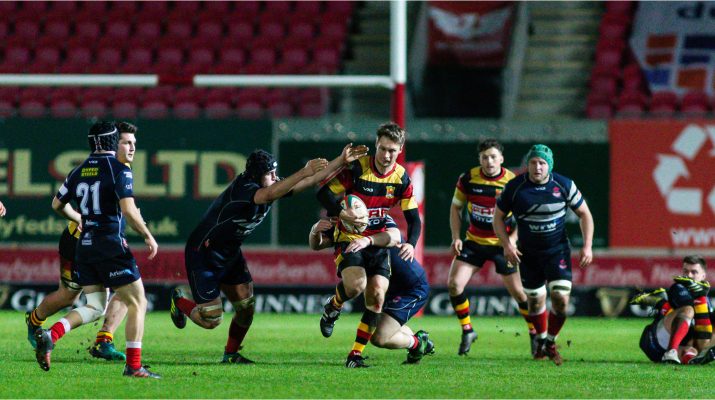 On a wet and windy night, where it was a win at all costs for the home side, it was the inexperience of the young Quins side that led to the Llanelli outfit taking the vital league points. There was never more than a score in it for the whole match, and play was taken from end to end so both sets of supporters were kept interested throughout.

The opening quarter saw both sides use the ping pong tactic and kicks were exchanged to no real effect. One sides attacks were met with equally sound tackling by the other. Strangely the home side chose to go for the touch line rather than the points with three kickable penalties only to see the Quins defensive line out hold out, and it was midway through the half that saw the first score board action when Ioan Hughes slotted a 22 meter penalty.

After a series of attacks and counter attacks, the Quins won a line out 30 meters out and a powerful burst through two tackles gave Dylan Morgan to demonstrate once again how difficult he is so stop and he crossed near the posts, Aled Thomas converted. The Quins line out was beginning to creak and after losing their throw in near the half way, the home side took full advantage and  two quick passes saw captain Nathan Hart through to score a well taken try, Hughes missed the kick, giving the home side that single point lead and once again a dreaded Quins yellow card for Gethin Davies saw them suffer.

Both sides showed signs of quality play and made a mockery of the WRU’s opinion that the Premier does not match up to expectations, as the intensity of play was always displayed and a credit to both squads. The home side took full advantage once again of a failure to secure a Quins line out and Ioan Hughes was on hand to go over for an against the run of play score. He missed the conversion.

With just a score separating the sides, play was exciting, and chances were narrowly missed by both sides due to excellent defence. The Quins were camped on the  Llanelli line for the long periods but despite their control their lack of patience was to let them down, and several powerful surges were left unanswered. With the match near injury time the Quins power play led to then winning a ruck and quickly move the ball out right for Dale Ford to go over in the corner. Aled Thomas missed a match winning conversion by literally inches.

From the restart, the Quins pilled everything into attack and as so often happens they made a mistake at the lineout and switched off and Josh Weeds was quick to follow up and cross for a fortunate try. Hughes missed the conversion.

The Quins losing bonus point keeps them in 8th place and comparative safety and with Aberavon the next visitors to the Park next week the season has much to offer. With Kemsley Mathias, Jac Price with Wales Under Twenty squad and several players missing, the performance was encouraging for this young squad, and they are looking forward to next week’s visitors Aberavon at the Park