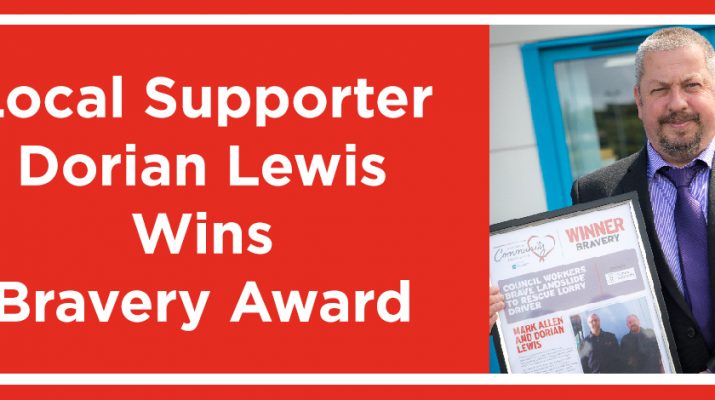 It is important that we recognise and report the bravery of one of our most loyal and popular supporters.

Last October during Storm Callum a lorry was swept by a landslide into the river Duad along the A484 at Cwmduad.
Dorian very bravely with his workmate Alan, who both work within the Carmarthenshire County Council’s highway team risked their lives to save the lorry driver whose vehicle had been sent by the force of the mud and debris hurtling down the extreme slope into the river.

They organised a human chain to drag the driver from the cab to bring him in safety.

It was so sad that at the same location and time a young man; 21 year old Corey Sharpling from Newcastle Emlyn who was a passenger on a bus caught up in the chaos, was lost as he came off the bus to phone his employers to say he would be late for work. Dorian was unable to reach this young man and witnessed the tragic incident despite doing his best to save his life, even entering liquid mud which came up to his neck to try to drag him to safety.
Dorian, who was awarded a medal for his bravery at the West Wales Community Awards in the Quinnell Lounge at the Scarlets said, “Unfortunately, we were unable to save one life that day. It has been an emotional evening reliving that time again.”

Dorian has been a very popular and loyal supporter of the Quins over many years and yet he supports the Ospreys as a region. We all find this a bit strange and hope one day he’ll see the light!

Thank you, Dorian, for your support of the Quins and we are all so proud of the bravery you showed last October and reacting as you did in such dire circumstances.