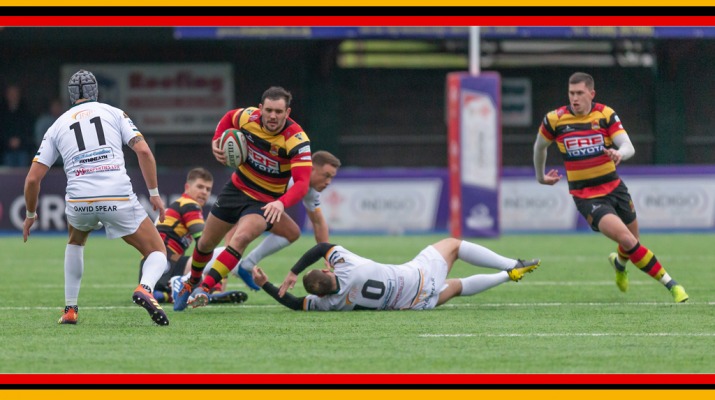 The old adage of ‘it’s always difficult to win away matches’ was never truer than last Saturday. This combined with several other things were difficult to overcome.  The strange bounce on this artificial surface, after having lost the previous three games, the Merthyr team decided to play in white socks and not their normal colour, the injury time curse struck again in the first half when the Iron men scored a try by touching the base of the upright in the 5th minute of extra time. We were pressing near the home line but were desperately kept out in the added time in the second half to deny us a victory, and another charge down follow up led to their winning try.

The Quins had first use of the scoreboard when Steffan Marshall slotted over a 3rd minute penalty only to see the Ironmen storm back with a Rhys Williams try after slick handling after 13 minutes. The kick failed the Quins pack were getting the better of the early exchanges with Steffan Thomas and Ben Leung winning the front row duel and our usual line control was evident throughout. On the half hour Steff Marshall restored the Quins lead with a 25 meter penalty With the game in its 40th minute a line catch and drive resulted in the referee awarding the Quins a penalty try. then came the base of the post score and Rhys Jones brought the home side back to within a point at the interval with the last touch of the half.

The interval talk had its desired effect when after all the Quins backs expertly handled to put James Newman clear to score wide out which went unconverted. Injuries littered the rest of the game  and both defences were in regular action . M Jarvis pulled three points back with a 30 meter penalty

for the home side and this left just three points the difference, Both teams were wanting to move the ball about and play was taken from end to end With ten minutes remaining , an attempted clearance by the Quins was charge down and from the kick ahead, centre Millard touching down in the left corner M Jarvis added the kick from the touch line leaving a hectic few minutes The Quins pack kept play in the home half but desperate defending kept them out, with the game into overtime the Quins rolling maul play was just prevented from giving them a victory they could have pulled off.

The losing Bonus point still keeps them in second place and all are eager to travel to LLANDOVERY next week.