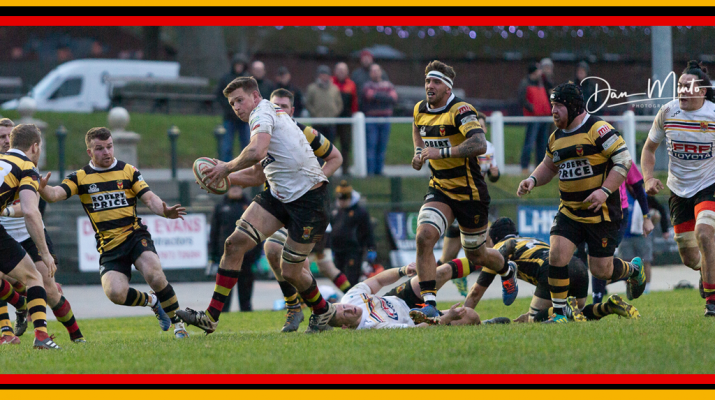 The Wales on Sunday newspaper was very complimentary when it stated that ‘Quins Flying High to keep the pressure on the Leaders’ after their bonus point victory over a strong Newport side.

The Park was in remarkable condition after all the heavy rain of the past week. Making five changes from the previous week they still dominated most areas of the match. Having lost the ‘toss’ they had the advantage of the very strong wind in the opening half, but it was the visitors who had use of the scoreboard first, when after the first ten minutes saw both sides test out the wind conditions, the black and ambers outside half Matt O’Brien slotted over a 25 meter penalty.

The Quins gathered at the restart and drove play deep into the visitors 22 and from the resultant maul the ball was moved left. Jon EVANS  found Steff Marshall with a well place pass and he sliced through a gap and his return pass to Jon Evans gave him the chance to make 15 meters to cross near the posts. Steff Marshell converted. The forward play of the Quins eight gave little opportunity for the visitors to make any headway and only desperate defending kept the scoreboard quiet up to the half hour mark.

More forward dominance kept play deep in the Newport half, which led to Lewys Millen, Richard Bloomfield and Ed Siggery control a rolling maul for Torrin Myhill to be credited with the score, Steff Marshell converted. The Quins defence was up to the task and Newport could make little headway with ball in hand and it was Matt O’Brien who ended the half with his second penalty.

The opening ten minutes of the second period demonstrated how deadly their attack could be when after a Newport attack was broken up, the Quins mounted a counter attack from their own half. Several Quins players handled with precision passing, to take play into the Vicarage corner and for Curtis Ford to round off this brilliant passage of play with the try. The kick sailed wide.

From the restart Morgan Griffiths gathered, and only as he can, started to run. He powered up to half way and found Ed Siggery in support, for him to make ground into the visitors  22 and an accurate pass to the right found Dale Ford on hand to race over for a well worked try. This was his 100th point for club. Marshall added the points to take the score up to 26 – 6 , which should have made the game safe, but in fairness the visitors were not  going to lie down.

Clever use of the wind meant that they were able to get into the Quins 22 from time to time and caused the home side to pull out all their defensive skills. On the hour mark a well timed pass to the fast following up of wing Elliot Frewen saw him slice through for a well worked try and the conversion by O’Brien took their score into double figures.

A Quins penalty was narrowly missed and with the game into its last ten minutes, a yellow card reduced them to 14 players and uncontested scrums.  This advantage gave the Black and Ambers the chance to create an overlap for their wing Harri Lang to cross in the corner for O’Brien to convert.

The reliable Quins defence came into play to see the game out and earn a well deserved 5 point victory, which keeps them in second place. This is the best start to a season for quite some time and all look forward to next week away at Merthyr and the return of Jac Price after his World Cup adventure in Argentina.