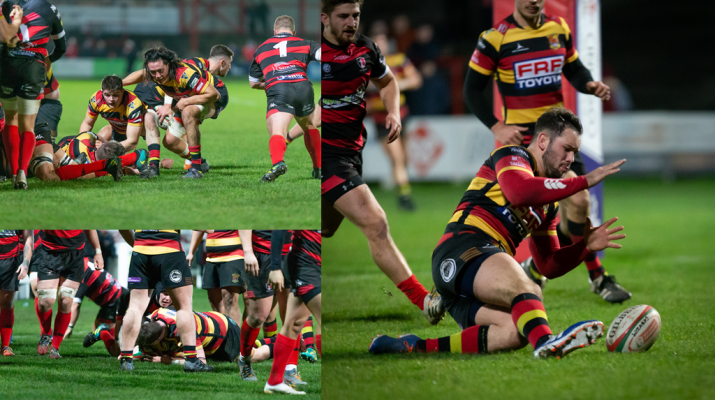 The Talbot Ground has always been a ‘bogey’ venue for the Quins, with only two victories there in 13 outings. There were 4 changes from the Bridgend game.

After a shaky opening 10 minutes and 12 points down, the Quins settled and their resolve took over to come away with a well deserved bonus points victory.

After just 3 minutes with the Quins attacking deep in the home half, the Wizards broke away from their own 22 to take play into the Quins 22 and their slick passing saw the ball move from the left touch line out right for Josh Clark to go over out wide out, for Garland to convert.

Another break away from a Quins attack, resulted in centre Chay Smith slice through for a well taken unconverted try and the Wizards were into double figures. This early set back would have put pay to many a side, but the Quins pack then took the game by the scruff and things changed.

Haydn Pugh, Shaun Jones and Richard Bloomfield took control of the line out and their well established power play came into its own. This control took play into the home 22 and after 15 mins they gained possession on the left touch line, and quick handling to the right gave Curtis Ford the space to go over in the corner. Steff Marshall added the points from the touch line and the Quins were back in the game.

Desperate defence prevented a Quins score minutes later but the stranglehold was on. This pressure was kept on and Nick Reynolds, after 28 minutes, was on hand to waltz through for a try near the posts for Steff Marshall to convert and take the lead.  Two mins later, a Garland penalty restored the home sides lead.

With the interval looming, the Quins had a purple couple of minutes and were awarded a penalty try after a powerful forward surge and seconds later another line out control led to Torin Myhill to be credited with the score and again. A magnificent conversion by Steff Marshall saw the Quins go in at half time with a comfortable 28 – 15 lead.

Minutes into the half Haydn Pugh was deemed to have been over vigorous in a tackle and yellow carded. But Steff Marshall was on hand with a 40 meter penalty minutes later. The home side took play up to the Quins 22 and Garland was able to find a huge gap to dash through for a try which he converted. Then followed a period of suspect whistling and the Quins had to dig into all their experience to prevent a score and it was after 67 minutes that they managed to get that score when Will Price crossed for Garland to bring the Wizards to within two points of the Quins total.

An anxious ten mins was played out and the Quins showed a spirit that was a credit to them and their fitness. Steff Marshal stepped up and slotted over a 40 meter penalty to signal the end of the game and herald a well deserved Quins victory that took them into second place in the Premier.  There were many notable performances and Richard Bloomfield was voted ‘man of the match’

The type of displays that the squad is putting together at the moment deserves much better support than they are getting  and with Newport the visitors to the Park next Saturday, come along and get behind the boys!

All Images from the @Indigo Welsh Premiership rugby match between Aberavon and Carmarthen Quins. The game was played at the Talbot Athletic Ground, Aberavon, South Wales on Friday the 6th of December, 2019.
Carmarthen ran out winners by 34 points to 29.
Photographer Dan Minto
mail@danmintophotography.com
www.danmintophotography.com