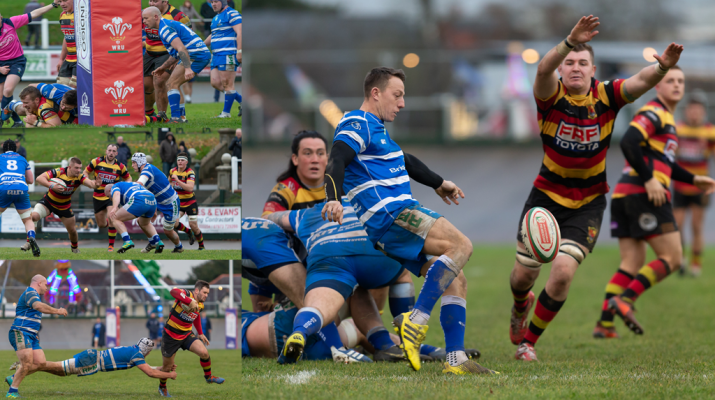 Despite making 7 changes from the Ebbw Vale match, the strength of the squad was clear to all and they ran in 6 tries to complete a bonus point victory. A deserved landmark was made when Torin Myhill went over for his first try, he passed the 100 points for the Quins. A notable achievement for a hooker.

Once again the Park was in good condition in spite of the week of rain. Bridgend kicked off and the home pack gathered and their rolling maul tactic took them from their own 22 a full 40 metres and was a fore runner of what was to come. This possession was let down when a pass went astray with a score beckoning.

It was evident early on that the visitors were going to find things difficult, and after 13 minutes a Quins powerful surge was capitalized when Jon Evans dived over to open the scoring, the conversion narrowly missed.

The Ravens did make use of the elements to take play into the Quins half for J.Chillcott to slot over a 40 metre penalty with a 50 metre, but missed minutes later with a 45 metre effort. The good ball won by their pack kept play deep in the visitors half and from a winning line out their rolling maul play made the 10 metres for Shaun Evans to be credited with the score. Steffan Marshall added the points.

With the interval looming the Ravens capitalised on a breakdown in a Quins attack to pick up and take play into the Vicarage corner for B Roderick to dive over for an unconverted try, making the mid way score 12  –  8 to the Quins.

The power play of the Quins eight was beginning to have its effect, and from a quick tap penalty, Jon Evans darted over for his second score under the posts. Steff Marshall converted. Steff Marshall was able to drive play deep into the visitors 22 with long touch finding probes. From yet another well found touch, the pack controlled possession for Torin Myhill to crash over wide out and S Marshall slotted over the difficult conversion for the bonus point score.

The Ravens were kept at full stretch but were unable to cope with the Quins powerful drives and after 75 minutes, Torin Myhill scored his second try. The conversion was missed.

More of the same followed and after a fine passing bout through several pairs of hands, Lewys Millen was on the end to cross in the corner. Steffan Marshall crowned a fine afternoons work with his 4th conversion.

This win takes them up to third place in the League and ready for anything. Their next match will be a televised affair in Aberavon a week on Friday.