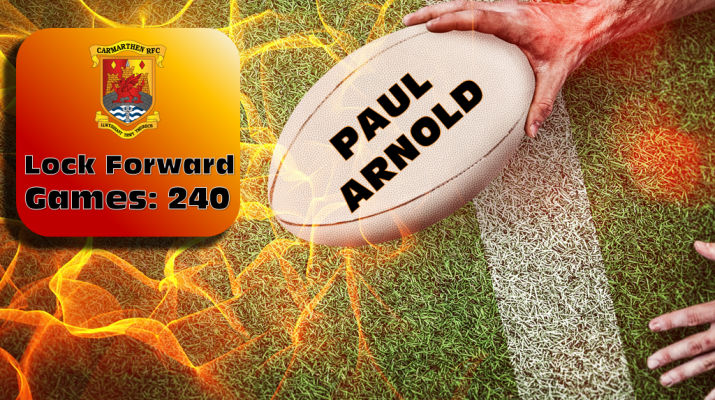 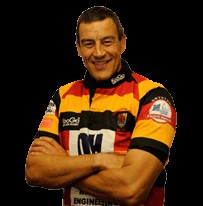 Paul joined us in August 2001, when we were in Division 1. He had previously played for Dunvant. Swansea and 16 caps for Wales. He played against England, Scotland, Ireland, France, Barbarians. Australia and others. His 6Ft 6ins frame had given him the chance to shine in the line out and his fitness level was the envy of most. Our then Coach, Peter Elsom was responsible for persuading Paul to join us and his signing was to prove one of the best we have made. Paul would turn up for training and matches, with a plastic bag, holding an Apple and a Banana and would always give 100% for the club.

He only missed 1 of the 32 League matches in his opening season 2001/2, scoring tries against Llanharan and Blackwood, and after a victory over Llangennech in the Tovali Cup semi final narrowly losing to Llandovery in the final. In those days we beat Merthyr 85-5 in the Park and the double over them at the Wern by 31-10.

The following season 2003/4, Paul played in 33 of the 34 League matches, and scored 9 tries to create a Club record for a Lock Forward and certainly helped us into a promotion place and the Premier Division for the first time. An opening match win by 53-3 over Beddau and 25 other victories, led to us rattling up 140 tries and 1139 points, and two league wins in successive weeks by 73 points in each, against Treorchy and Rhumney were influenced by Paul’s contribution.

Season 2003/4, saw us take on 15 other top Welsh Clubs, The challenge was set and to the squads credit they responded to that challenge. After losing the opening matches to Cardiff and Pontypridd, they ran in 6 wins on the trot with Paul’s dominance in the line out, immense. He scored 6 tries to take us into 5th place in our first season in the Premier. An added bonus was Paul’s try against  Llandovery in the Tovali Cup semi final win and taking the Cup in the Final against Llangennech.

Season 2004/5 saw the Quins win their opening 5 matches which included that famous evening on Sept 11th at Sardis Road when the team slammed Pontypridd 23-NIL, and Paul’s efforts helped the Quins complete the double over Ponty with a 28-13 victory in the Park. This was Paul’s first win and double over them after many attempts. Paul scored a try in the Clubs record Welsh Cup win away at Tredegar Ironsides by 81-0 and was in the side that beat Cardiff in the next round of the Welsh Cup. We finished in 7th place and our 84-7 win over Newbridge was our record League win up to then.
Paul played in 31 of the 32 League matches.

Season 2006/7 with 16 wins out of 22 took us into 2nd place and just missed out on promotion back to the Premier. Paul played in all 22 League games and was in the side that won the Tovali Cup.

Another second place in season 2007/8 saw us win 17 of the 22 matches. Third time lucky was the slogan for us gaining Promotion back to the Premier in 2008/9 with Paul playing a major part in the Clubs success once again and another Tovali Cup win against Loughor, a feather in Paul’s cap.

His stay with us was a highlight for all Quins supporters, and an inspiration to all who played with him. Paul was seen in Tenby the other day for the ‘Iron Man’ run and true to form, under his arm was his trademark apple and banana, which had seen him right throughout his career. He is a force in these Iron man events as he was on the rugby field.

WALES: Gained the first of his 16 Welsh caps in 1989 and played his last international game in 1997