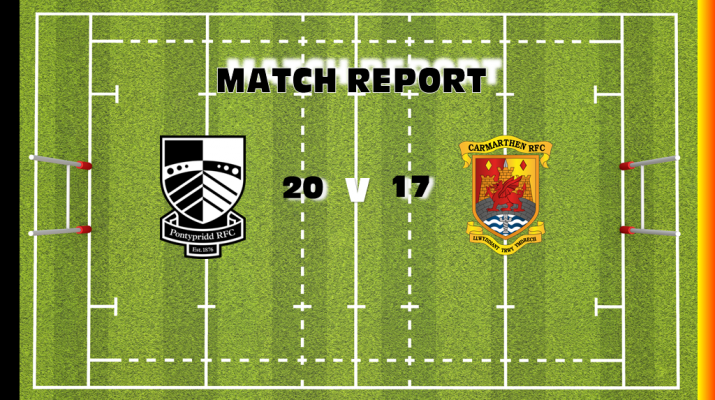 For a National Newspaper to describe this encounter as being ‘edged out’ by Ponty, is scandalous. Having Won the last TWO meetings of these Clubs, the Quins should have taken this one and must feel aggrieved at the whole handling of this televised match. Coming away with just a losing bonus point is not what possession and territory deserved.

From a well struck kick-off, Dale Ford was able to expertly gather and power to within 10 meters of the Ponty line. This early pressure was kept for the next 5 minutes and only desperate defence kept the score board quiet. The Quins line out was working well and after 5 minutes this superiority saw a rolling maul come desperately close and an all defence was called for.

The home side saw a handling move break down and the quick thinking Morgan Griffiths picked up and started to counter attack from his own half. His power run took him up to the Ponty 22 and he found Torin Myhill on his shoulder, only to be brought down inches short of the line and a clear chance was narrowly missed.

Steff Marshall narrowly missed a 40 meter penalty minutes later. This superior line out and tight play kept the Ponty defence at full stretch, keeping the opening twenty minutes scoreless. Another Ponty passing move was halted and the Quins kick up field took play into the home 22, but their impatience was to let them down and the home team cleared.

After 25 minutes the Quins kept varying their play and after 25 minutes another secure line out resulted in a rolling maul for Lee Taylort to power over to give Steffan Marshall an easy conversion – and deserved lead. Two kicks were charged down in quick succession when scores were on, preventing the possession advantage they were enjoying for turning into points. A rare passing bout by the home side moved the ball through several pairs of hand together with TWO forward passes gave Tom Rowlands to go over for try for D. BIRD to level the scores with the conversion and signal the end of the half.

The second half was minutes old when Ifan Beynon-Thomas was yellow carded for kicking the ball out of a loose maul, which amazed even the home support. The home support were getting shirty when their favourites could not master the Quins seven. The Ponty side then produced a moment of magic and moved the ball from their own 22 through several hands for D.Stuckey to race the final 20 meters for a fine try for Bird to convert  This seemed to spur the Quins into some powerful action and they moved upfield with determination and from the maul that followed, Ivan Beynon-Thomas moved to his left to find Nick Reynolds in support and his silky running did the rest, straight through a gap to cross for a brilliant try only to be doubted by the referee and he called for the TMO – no chance the try was good. The conversion sailed just wide.