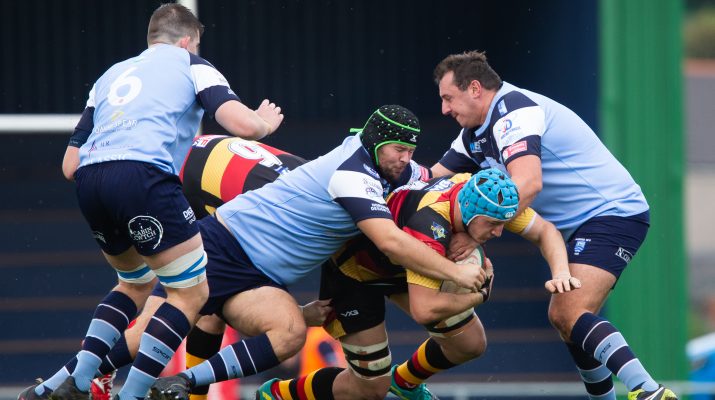 1st XV News
September 16, 2018December 5, 2018
Posted By: Natalie Jones
Bargoed RFC 14-19 Carmarthen Quins
The Quins made two changes from the Cross Keys match, but the curse of recent seasons continues as they once again could only score three tries, when more were there for the taking. It is more important than ever that we cash in on bonus point opportunities.
Both sides gave early indications that moving the ball was the order of the day, giving both defences plenty of action. With the Quins line out trio of Haydn Pugh, Shaun Jones  and Lee Taylor in commanding form, it was the Quins backs who looked the more dangerous and several of their attacks were thwarted  by desperate Bargoed defending and it took 27 minutes before, after several players had handled, that Nick Reynolds was able to weave his magic and beat several defenders to cross wide out. Aled Thomas converted from the touch line.
Scrum Half Gareth Rees, playing his first match for the Quins, was causing all sorts of problems and was able to feed his backs, keeping the home defence at full stretch, and with the interval looming, and play in the home 22, a midfield break and an inch perfect pass gave Dylan Morgans the chance he never misses to go over wide out. Aled Thomas doubled the  Quins score with a touch line conversion.
The second period began with the Quins on the attack, and more accurate  passing put Torin Myhill clear to score a well taken try, the kick sailed wide. The home side changed their front row and they were able to win more ball which led to Jason Howells darting over  for Josh Howells to convert.
With the chance of a bonus point on offer, the Quins pilled on the pressure, but when patience was needed, their enthusiasm was misdirected and chances were missed. The home backs were never able to match the Quins so it was left to their pack to gain ground. After many exciting patches of play, and ten minutes of added time A Herbert was able to touch down and Prosser to clinch a losing bonus point with the last kick of the game.
This was the second week running that the Quins had leaked a losing bonus and can only hope that it does not come back to haunt them later this season.
Next week we play  to hosts to Cardiff RFC at the Park with a 2.30 kick off