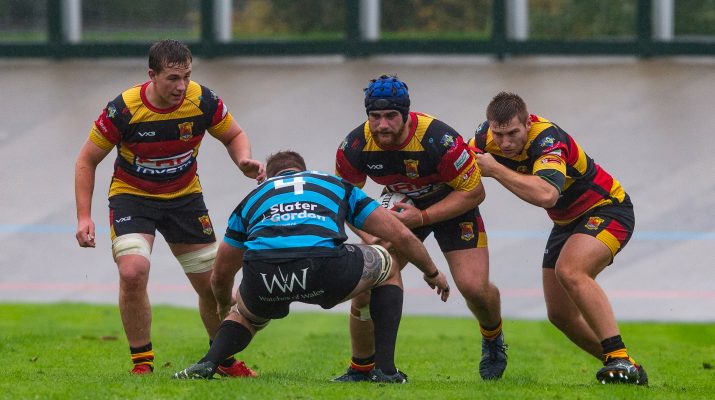 The City Slickers hit the Town after a good victory over Newport last Saturday, expecting to continue their run. The Quins had other ideas. In wet and windy conditions, the Park was once again in immaculate playing condition.

The Quins made six changes from the Bargoed match and introduced two of their Junior Internationals in Osian Knott and Jac Price to the Premiership. The playing conditions did little to prevent both sides from moving the ball. Despite giving away height and weight, the Quins pack were able to match and better the Cardiff eight throughout the game.

The visitors took a tenth minute lead with a Steff Jones penalty, only to see the hosts level matters minutes later with an Aled Thomas penalty. A  few minutes later a Cardiff attack took play up to the Quins line. An obvious Cardiff knock on was missed and a neat chip over the home defence gave Will Rees-Hole to catch and touch down. Steff Jones took the visitors into double figures with the conversion. The Quins line out was in commanding form, winning their own throw in and often disrupting the Cardiff throw in. Despite being on the wrong end of the whistle, the Quins won a penalty for Aled Thomas to convert and minutes later he slotted over his third to take his side to within a point at the turn around.

The half time talk certainly had its desired effect and the Quins upped the ante. Cardiff tried to use the wind advantage, only to be met with the safe Aled Thomas and Jac Wilson, who used their backs to counter attack with relish, causing the visitors defence all sorts of problems. More strange decisions from the officials added on the frustration of the Quins players, but their patience held and prevented any dangers.

After gaining the upper hand Aled Thomas put over his forth penalty from 40 meters to give the Quins a deserved lead. The Quins tackling was of the highest standard and they drove the Capitals side back time after time. A communication hic- up  led to a brief delay but this did not deter the Quins concentration and after winning a line out 20 meters out, their control and power drove play up to and over the Visitors line for Nick Reynolds to be credited with the score, Aled Thomas converted from the touch line, giving the Quins a two score lead.

The visitors found themselves in a catch-up situation and were met with crunching tackles, and swift counter attacks by the Quins.  They elected to take a pot at Goal in added time in an attempt to get a losing bonus point.

The game was allowed to continue for fully 15 minutes of added time, before the Referee called a halt to signal a well-deserved Quins victory which moves them up into 6th place. All the replacements were used, giving game time to the squad and that vital experience need to improve.

This was a performance that truly shows a fifteen man approach and team spirit that will win them many more matches.

Next week they travel to Bedwas for what promises to be an exciting encounter.