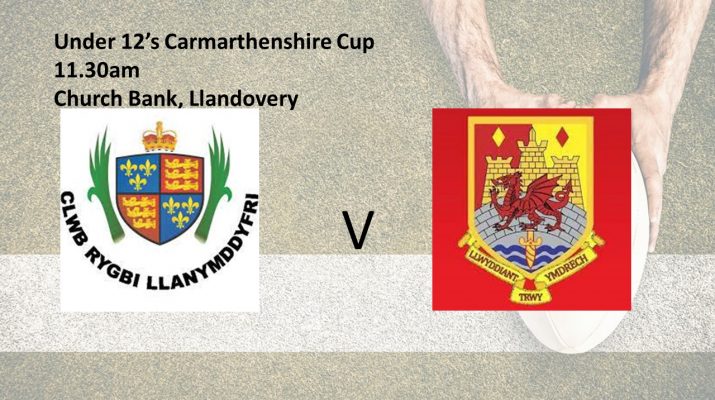 Following a postponement due to Covid our Under 12’s are also heading to Llandovery this Saturday where they will take on their counterparts in the rearranged Carmarthenshire Cup Preliminary Round and as an added bonus to all the young players it will be a curtain raiser for the seniors game.

The Quins will head to Church Bank knowing that this will be another tough test against a Llandovery side that never knows when to give up. Games between the  two sides over the age groups have always been close with Llandovery generally emerging victorious.

The two sides are yet to meet in the 15 a side format but did have a friendly game of 10 a side earlier this year with Llandovery scoring two late tries to tie the game three tries all.

It is testament to both teams that the coaches have nurtured a tight squad that will play for each other as well as the club. This coming Saturday will be no different.

The Quins side has prepared well over the weeks with some tough games against Felinfoel and Burry Port with a 26 pts to 7 victory against Felinfoel and a 7 all draw against Burry Port. Special mention has to be made to Under 16s Coach (former Welsh International) Deiniol Jones and Giles Thomas (Carmarthen Quins all time record points scorer) who have given their time to give the Quins some specific pointers on key areas of the game. The players soaked up all the hints and tips and will be keen to try it out on Saturday.

With a final squad of 22 available with one missing out the young Quins will be keen to put in a performance for Dan who won’t be there.

Captain for the game  tomorrow will be Caleb Morris and we caught up with him after training.

What position do you play? Number 8

What is it like to be part of the Quins? I haven’t been part of the Quins family for long, I joined in May this year. As soon as I came I was made to feel so welcome by everyone and I’ve got some great friends here.

What is your favourite rugby memory? My first game for the Quins we played against Whitland in a touch rugby game because of Covid. As Whitland were passing the ball I had a lovely interception, did some lovely footwork and scored my first try.

Who is your favourite rugby player at the moment?  It has to be Taulupe Faletau because he plays the same position as me. He has a great work ethic on the field, great foot work, he carries the ball well and he’s always busy tackling. He’s someone I’d like to be like.

What are your future hopes for yourself in rugby?  I’d like to definitely reach the next level of rugby and either play for my favourite team the Scarlets or my Grampy’s favourite team Cardiff. Hopefully, I’ll be good enough to play for Wales and even get a Lions cap too.

Caleb is certainly one of the characters of the squad but like the rest of the squad represents the Quins with courtesy and does nothing less than his very best. 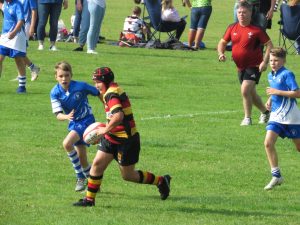 Whilst the fixture is a cup tie the coach has ensured that the day is a fun day and a bus has been organised for the team and parents and all those travelling on the bus have to dress in fancy dress following the game in a costume that starts with the first letter of their name. So if you are in Llandovery on Saturday don’t be alarmed if you think your eyes are playing tricks on you, they aren’t and people are dressed up!